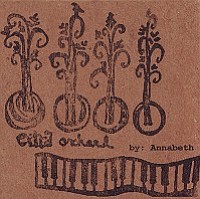 If your summer soundtrack needs a chanteuse to go with that red wine or stout beer - give or take some incense and a Monsoon afternoon rain - pick up a copy of "Extra Orchard" by Annabeth McNamara.

The 2009 CD was masterfully recorded by Bicycle Recordings' Bob Schwenkler, an independent Northwest record label producer. The blend of Annabeth's vocals and lyrics and Schwenkler's sonic exploration makes for a texture heavy on the honesty and light on indulgence. The sound is as organic as bone meal fertilizer, and just as potent.

The CD's best track. It's the state of a 20-something-year-old looking in the mirror. Not necessarily Annabeth; it could be anyone. Could be you. The song's reality won't be the biggest in a lifetime of moments, but it's a captured moment of awareness nonetheless. She starts with the basics ("Here is my foot, and here is my knee, my ears ..."), goes through her life to this point (that time "in class" and "empty spaces"), and ends (so far) in a personal world of self-realization ("Who's to say what's real and true?"). Independence ultimately wins out ("So now you can get up and leave, walk away"). The song closes with Annabeth singing "there you are" instead of the title refrain. She's already looking back at the past that was, considering herself found.

Her statement on tolerance and acceptance for everyone - "a boy or girl or something in between" - never loses relevance. It's more playful than preachy, balancing lines like "gender is a mind-bender" with basic human observations about people needing to chill out on their own judgmental rules ("What's the point of keeping it straight/When that line just leads to hate?"). Right on.

The recording itself takes center stage on the CD's closing track. Sure it sounds as though Annabeth, alone with her piano, was recorded on a cell phone microphone in a windowless hallway, as though she just rolled over and went for it in a spontaneous take, damn the digital disadvantages. That's also what's great about it. Like Annabeth, it's refreshingly pure.

Odd track for an album opener. Hard to find a connection with unexplained lines of "House of cards is falling down" followed by "London Bridge is falling down." Annabeth is hiding her meaning a little too well. Wonderful accent harmonies, though, against an exquisite push-pedal organ on a track maybe otherwise better left untouched as an instrumental. Straight music, too, conveys a lot.

Annabeth drifts, singing either of romantic heartbreak or of the solar system - "How many times has the earth circled with you, as the earth circles the sun?" I prefer an earthbound Annabeth, gravity and all. It's saved here by the music track and haunting percussion from Schwenkler's boldest contribution to the set. Check out Annabeth's deep breath against the percolating percussion at the 5:20 mark.

"I don't sing music, music sings me," Annabeth says in her liner notes. I don't know if there's anything commercial in her sound, and that's just what is most genuine about it. Her songs find you, period.