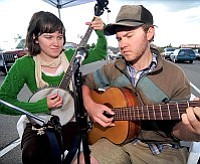 "I love to sing. It makes me feel so good and free," said Annabeth McNamara, 23, who calls herself "The Green Musician."

For the past month, she has been singing and strumming her way around fruits and vegetables on her "Farmers Market Tour" that included performances at Prescott, Prescott Valley and Chino Valley farmers markets. She also vowed to eat only locally grown food for the past month.

"I want to be a low impact woman - take life easy and eat local," McNamara said Sunday afternoon after playing her last gig at the Prescott Farmer's Market Saturday. "It was a very humbling experience."

She also recently released a CD, "Extra Orchard," on the What A Mess ! Records label, which is available online at wamrecords.wordpress.com.

"I describe my music as an overall folk genre, and alternative indie music once in awhile," she explained. "And I love 'freak folk.'"

Although at times she plays with other musicians as part of her "Cicada Sound Collective," she does not have a group. Her repertoire of instrument talent allows her to be a one-woman show: guitar, push-pedal organs, accordions, piano, river stones, glass jars, nickels and dimes, and her beloved banjo.

"It scratches my itch like nothing else can," she said. "It makes me purr."

She discovered the banjo while living near the Appalachian Mountains in Virginia and North Carolina. She is so enamored with the banjo that she developed her own style of picking.

"I call it the 'Annabeth shuffle,'" she said with a grin. "It's like an alteration of the claw hammer style of playing."

If the banjo makes her purr, nature lights her fire.

"The forest doesn't try to be productive: it just breathes out air and drinks the sun and makes beauty effortlessly," she wrote on her blog, annabethsongbird.com. "This is what happens to me. When I am still and happy, music flows out - I sing, I sing."

She writes her own music and her songs are laced with references to the earth, spirituality, fun and adventure.

"I always felt connected to nature and the earth," McNamara said. "I get solace from walking in the woods. It's like someone said, 'Make your life a prayer'."

She started writing poetry at the age of 13, and viewed putting her words to music as a "natural transition."

Although the former Prescott College student appears petite and gentle, she has an adventurous side that reflects her passion for life.

A few years ago, McNamara dropped out of college (she has one year to complete,) got rid of her possessions and hitchhiked to Mexico.

"I got thrown into a Mexican jail, and wondered what I was doing with my life," she said. "Then I took a bike ride by myself up the West Coast. I'm the wanderlust type."

McNamara holds dual citizenship with the U.S. and the European Union because of her Irish roots. In October, she tours France, Switzerland, Belgium and Spain. And even when she is singing songs from the Appalachian region, her voice has a strong resemblance to Celtic superstar Loreena McKennitt.

Because of her love for poetry, McNamara usually first writes her lyrics, or poems, and then adds the music. Her best places for writing, she said, are "the bathtub and in bed."

"When I sing, life seems happy, like a landscape of harmonies," she said. "Your voice vibrates so close to your heart and head."

Although McNamara is committed to her music, she is not sure what direction she wants to go in the music business.

"Playing music and living on the earth is a never ending focus," she said. "I'm constantly questioning selling art for money. But the music is always there, and I always come back to it."