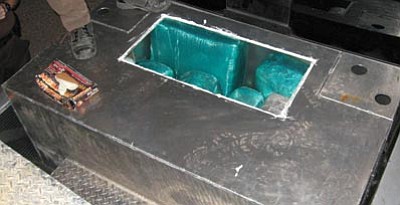 Yavapai County Sheriff's deputies arrested a man Tuesday evening after a deputy found nearly 342 pounds of marijuana in a hidden compartment of a truck during a traffic stop on north Interstate 17 near Cordes Lakes.

A deputy who stopped a 2005 Dodge Dually truck driven by Nigel Davis, 37, of Spring Valley, N.Y., for following too closely and an unsafe lane change noticed Davis fumbling, shaking and many air fresheners inside the truck, said Dwight D'Evelyn, spokesman for the Yavapai County Sheriff's Office.

Davis told the deputy he was buying the truck from the man in Maryland it was registered to and gave two contradictory versions of his travel plans.

While the deputy spoke with Davis about the traffic violations, a K9 deputy, Aros, walked around the truck and immediately alerted on the vehicle, D'Evelyn said.

Davis told deputies they could search the truck and that he'd smoked marijuana the night before while sitting on the tailgate of the truck, D'Evelyn said.

After moving the truck to a secure location, deputies took a closer look at the fuel tank and tool box in the truck bed, and Aros alerted on those as well, D'Evelyn said.

"Last year, we found a large amount of marijuana in a similar type of converted external gas tank along U.S. 93," D'Evelyn said.

Davis stopped talking to the deputies after they found the marijuana and arrested him, D'Evelyn said.

Deputies booked Davis into the Yavapai County Jail in Camp Verde on charges of transportation of marijuana for sale and possession of drug paraphernalia.