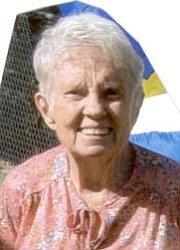 Maxine was born on Oct. 26, 1919, in Byron, Mich., to June and Margaret (Lewis) Armstrong. She was the third of seven children.

She is preceded in death by her parents, three sisters and three brothers.

After high school graduation, Maxine worked as a housekeeper and then went to work at the Tuberculosis Sanitarium in Howell, Mich. She later went to work at the airplane bomber plant in Ypsilanti, Mich., during the war. This is where she was working when she met the man of her dreams, Newell. They both loved dancing and met through a mutual friend at a dance. They were married in September 1942. Maxine moved onto the Newton family farm, where they stayed until 1951 when they moved to Prescott. Maxine and Newell were married for 62 years. Newell passed away in 2004 at the age of 97.

After her children were raised, Maxine went to work for the Yavapai County Treasurer's Office, where she retired in 1984.

She is also survived by her great-grandchildren, Madelyn and Troy Jackson, Brooke, Breea and Blake Hayes, Casey and J.J. Welker, Talon Newton, Hayley and Taylor Johnson, and Bryce and Payton Johnson.

In November, Maxine's entire family surprised her with a 90th birthday party at her home.

A Memorial Mass will be celebrated at 10:30 a.m. Friday, June 11, 2010, at Sacred Heart Catholic Church in Prescott. In lieu of flowers, the family request that donations be made to Meadow Park Care Center, 864 Dougherty St., Prescott, AZ 86305.