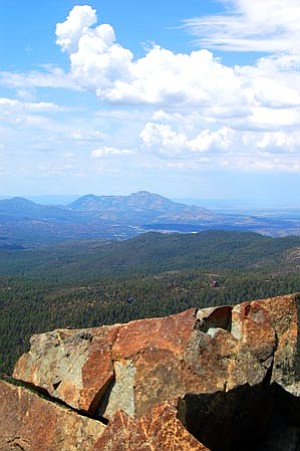 Joanna Dodder/The Daily Courier<br> Granite Mountain is visible in the background of this view from the top of Spruce Mountain.

Ask any seasoned local trail user about the Groom Creek Loop Trail, and the first thing they're likely to remember is the view.

It's a tough climb or ride up Spruce Mountain, but the view is worth it - especially if you continue your climb right on up into the Spruce Mountain Lookout fire tower.

So it's no wonder that Arizona Highways' August issue is featuring the trail in its second annual "Best of Arizona" list of 50 favorite things to do.

Prescott is nestled below, with mountain ranges standing out in all directions as far as 80 miles away to Arizona's tallest, the San Francisco Peaks.

"You can see so far away," said Cindy Alward, who owns Prescott's High Gear Bike Shop with her husband Steve. "It's a hard work out to the top, and then as you're descending it's so beautiful."

That phrase has true meaning for Cindy. After only a few dinner dates, Steve decided to take Cindy to the Groom Creek Loop for their first bike ride together - on a tandem bike with little or no suspension.

"He launched me off the back like three times," Cindy recalled. "I'm like, "What have I done? I'm going to die today.'

"It was pretty crazy, but I had the time of my life."

Cindy and Steve adopted the trail about 15 years ago after getting married, and every year their friends and staff join them for a trail maintenance day.

"Spruce Mountain is a beautiful area, and it's one of the longer loops in Prescott that's great for riding," bike shop employee Travis McCabe said.

The trailhead is located on the Prescott National Forest along Senator Highway (called Mount Vernon in Prescott). From the intersection of Mt. Vernon and Gurley Street, drive 6.4 miles south. The trailhead is on the east side of the road.

Now 9.5 miles long after some trail reroutes last year, users can choose to go up the steeper and shorter route or come down it. The total elevation gain is 1,350 feet, topping out at 7,693 feet. Picnic tables, horse hitching posts and a restroom are situated just below the tower.

Fire tower lookouts are happy to talk to visitors as long as they aren't involved in a wildfire situation.

Shaun Jones was up there when we visited earlier this month, staffing the tower for only his third time while on injury leave from his usual job on a fire engine.

"You can see the whole tri-cities right here," Jones said. He demonstrated how to use the antique Firefinder to notify the forest's fire dispatch center about the approximate location of any smoke or fire he sees.

Susie Bragg is the usual lookout on Spruce with her trusty rescue dog Space, and she's been up there all summer for six years now. It's one of four fire towers the forest staffs each year.

"I'm happy I can do something to help the forest," she said.

She estimates about 100 people visit the tower each week, and maybe two times that many people do the non-motorized trail itself. It's popular with bikers as well as hikers and horseback riders. On a recent weekday, however, we had the trail all to ourselves.

People who are unable or unwilling to hike up to the tower can drive five miles up Spruce Mountain Road off Senator Highway. A high-clearance vehicle is necessary.

The tower is staffed about 8:30 a.m. to 5 p.m. Thursday through Monday, approximately May through August. During the off-season or when the tower is closed, a gate blocks the last half-mile of the road.

If you visit this time of year, you could get some unwelcome excitement. Monsoon lightning has struck the tower more than once when Susie was inside. That's why the chair legs sit on glass insulators.

"It is real loud and a blinding flash of light, and a burning smell afterwards," Susie says of the lightning experience.

Along with the long views, the close-up views also are worth noticing on top of Spruce Mountain. This time of year, thousands of ladybugs are crawling around on the bushes and rocks beneath the fire tower. It's a bit of a scientific mystery why ladybugs converge on Arizona's mountaintops during the midsummer, since these areas aren't full of their favorite food, aphids.

A ringtail nicknamed Biss also is a frequent visitor to the top of the mountain, usually at night. Susie has seen it climbing around on the tower and looking in the windows.

The trail itself offers diverse vegetation, including firs that are relatively rare on this forest and more than its share of huge gnarly old alligator junipers. We spotted deer, ground squirrels, bumblebees and butterflies on the fauna side.

Near the bottom of the longer section of the trail is a short detour to a magical field of giant boulders that clearly attracts plenty of hikers and bikers, judging by the tracks. It's a fun place to stop and reflect on the day before heading home.