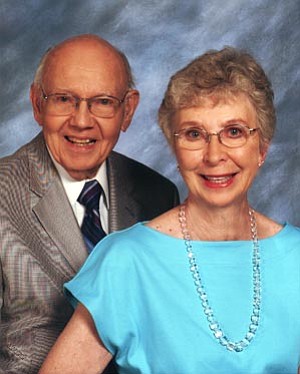 Bob and Connie Thacker celebrated their 50th wedding anniversary and Bob's 90th birthday with friends and family at the Prescott Resort on Saturday, July 17. They hosted a dinner for 20 out-of-town guests and family at Las Fuentes on Friday, July 16, as a pre-celebration. Cousins who had not seen each other for 35 years participated.

Connie and Bob met in Tachikawa, Japan, and married on July 13, 1960, at Sheppard Air Force Base, Wichita Falls, Texas. Following Bob's 30-year military career, with many moves, they retired to Prescott in 1993. Both volunteered with many organizations, including serving with Trinity Presbyterian Church, Bob as a deacon and Stephen Minister and Connie in the choir. They are proud of their family including three children, five grandchildren and four great-grandchildren.