Man arrested on charges including kidnapping 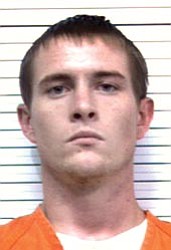 Prescott Valley police arrested a man Saturday morning on charges including kidnapping after he allegedly refused to let a woman leave a home in the 8300 block of Dana Drive and repeatedly threatened to kill her and her 10-month-old daughter.

When officers arrived at Sandies Market in the 3900 block of Robert Road, they spoke with a woman who said she and Tumlinson had an argument late Friday afternoon, Bonney said.

As the woman tried to leave the home with her daughter, Tumlinson allegedly followed her around the home, repeatedly blocking her exit, and told her she could not leave, Bonney said.

The woman told police Tumlinson allegedly broke a bookcase, her cell phone, and made threats about killing her and her daughter.

The woman told police she waited until Tumlinson fell asleep, grabbed some items for her daughter, fled the home, and called police.

When officers spoke with Tumlinson at the home, he said he hit the woman in the face.