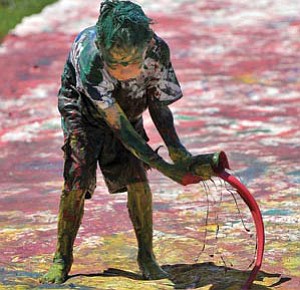 Salem Soma, 7, sloshes paint on a canvas for the “Plunge for the World Record” painting during the 2009 World Arts Festival in Prescott Valley.<br> Photo courtesy of Matt Hinshaw

The World Arts Festival is undergoing a name change and will share a roof with the Creative Energy Fair Oct. 9 at Tim's Toyota Center.

The Prescott Valley Arts and Culture Commission changed the festival's name to Fall for the Arts in response to feedback from vendors and the public, Parks and Recreation Director Brian Witty said. He added commissioners chose to change the location from the Civic Center grounds to the events center because the arena would provide "a more secure environment" from the weather.

"You can come to be educated with regard to renewable energy, and you can come to Fall for the Arts and see all the natural and organic applications that have been created into works of art," he said.

Scheduling both events at the same location and time - from 10 a.m. to 6 p.m. - will boost overall attendance, said town planner Ruth Mayday, who is organizer the third annual energy fair. Admission is free to both events.

Mayday helped to organize the first fair in 2008 in response to a meeting Town Manager Larry Tarkowski arranged to seek ideas from the public on jump-starting the economy and reducing dependence on fossil fuels. The fair has featured vendors who promoted bio-fuels, solar heating and cooling, and other consumer services that encourage energy conservation.

By contrast, the World Arts Festival provided Mexican music, a hip-hop dance troupe, other entertainment, and vendors who sold Native American artwork and other goods. It marked its seventh season in 2009.

Fall in the Arts will feature local musicians and other entertainers, Witty said.

Witty said music therapist Persephone will return with her show for children, adding participants will get a chance once again to paint an expansive canvas.

Unlike in 2009, event organizers will not try to make the Guinness Book of World Records for creating the largest single piece of art with the most participants, Witty said. Instead, they will paint the canvas just for fun.

Changes will occur because of the indoor venue, Witty said. He added the fall fest will not have an inflatable playground, and concessionaires inside the arena will sell food and beverages - not outside vendors.

"We won't have our beer garden," Witty said.

The World Arts Festival did not feature the Kinetic Sculpture Race around the Civic Center in 2009 because of the construction of the new library, which opened in October.

"The Kinetic Sculpture Race was something that we tried very hard to get enthusiasm (for)," said Cynthia Jones, an event organizer and former member of the commission. "We had a core group that was very passionate. Let's just say it is on hold."

Jones continued, "We are still hoping some day it may be resurrected."

Parks and Recreation and the commission scaled down the World Arts Festival to one day in 2009 to cut costs. Witty said the budget for Fall for the Arts is $12,000.

Witty is seeking vendors and artists for the festival.

Prospective vendors for the energy fair may call Mayday at 759-3058.