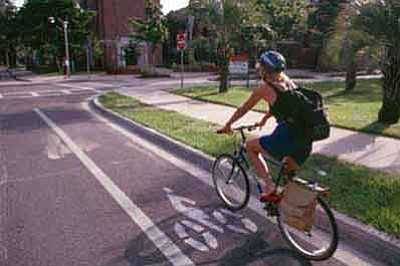 Cars, trucks, vans and motorcycles all have the right to be on the road. And, yes, bicycles have that right, too.

An article about a court case the Courier published this week sparked reader comments on dCourier.com that make plain the rivalry that exists between some who drive cars and those who pedal bicycles.

The jury convicted a local driver of misdemeanor charges of endangerment and reckless driving after an incident in which the bike rider he was following made him "frustrated and angry" because the bicycle was "taking up the whole lane and going too slow." The bicyclist testified that the driver scared him because he "repeatedly threatened to rear-end me."

Readers' reactions to the story ranged from "Do you believe bikes should stay off the road and out of the way of cars, even if the law says different?" to "How many times do bicyclists nearly cause accidents by their actions?" to "Let's create a culture of respect for cyclists so incidents like this one do not occur."

A culture of respect will not occur until both drivers of vehicles and people who ride bicycles commit to getting along with each other.

A good place to start showing respect for each other is by first obeying the rules of the road that stipulate how each shall behave when they encounter each other.

State law says that a person riding a bicycle on a roadway (where there is no bike lane) or on a shoulder adjoining a roadway is granted all of the rights and is subject to all of the duties applicable to the driver of a vehicle.

As it relates to bicycle riders, the law also says that a person riding a bicycle on a roadway at less than the normal speed of traffic shall ride as close as practicable to the right-hand curb or edge of the roadway.

Further, the laws state that drivers overtaking or passing a bicycle traveling in the same direction shall leave a distance of at least three feet between them until the vehicle safely passes.

Motorists create their fair share of accidents and deserve consequences. Bicyclists with bad habits and disregard for motorists need consequences as well.

But a lot of angst and injuries - and even deaths - might not happen if motorists and bicyclists looked out for each other and decided to get along when they are on streets where they both have the right to be.