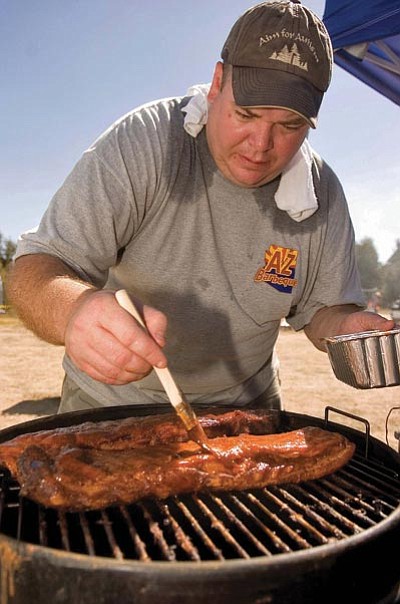 Matt Hinshaw, file/The Daily Courier<br> Crash Dejournett with the VRM Pit Crew out of Buckeye bastes ribs for competition at the inaugural Prescott BBQ Days in 2009.

For folks who are in town this weekend and have a hankering for eating scrumptious meats from those who baste them best, look no farther than the second annual Prescott BBQ Days.

More than 30 professional barbecuing teams from across the Southwest and California will compete for $10,000 in total cash prizes, trophies and bragging rights for the best-tasting barbecue Saturday at the Prescott Rodeo Grounds, 828 Rodeo Drive.

Friday's activities also will provide a sneak preview of several top-notch barbecue competitors, such as Rhythm 'n Que (a member of which won Prescott BBQ Days' 2009 grand championship), Otis and the Bird, Slap Yo' Daddy BBQ and Loot N' Booty.

On Saturday, participants can buy entry tickets for $5 each that include two "taster tickets" for barbecue sampling and access to a pair of stages with live music - including sounds from the Prescott-based band, the Cheektones - and several other attractions. Additional taster tickets are available for $2 apiece. Children 12 and younger get in free.

Barbecue participants also can meet the competitors and watch the judging every hour on the half hour for chicken, ribs, pork and brisket.

"It's a fun-filled family event for our community," King said. "We're hoping to make this a signature event for Prescott."

Meanwhile, two large tents on the grounds will offer shade and entertainment with displays from area nonprofits and other business sponsors. Children can play in the Kids' Zone, complete with a bouncer and face painting, while the adults indulge in the barbecue.

In addition on Saturday, amateur barbecue cooks, including those from this area, will compete in the Backyard Throw Down as young, aspiring barbecue enthusiasts take part in the Kids-Q.

The Backyard Throw Down, which features burgers, chili, chicken and kabobs, will make available more than $1,000 in prize money and trophies. In Kids-Q, which showcases burgers and chicken, all entries receive trophies and prizes.

To become a sponsor or to donate a raffle prize for Saturday's raffles, contact King of the Prescott Sunup Rotary at 925-3645.

For more information about the event, call King or log on to the Internet at www.prescottbbqdays.org.