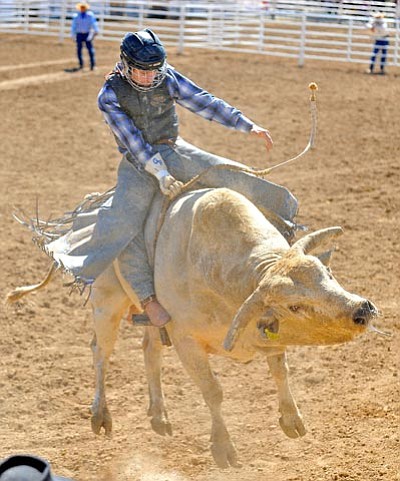 PRESCOTT - For the first time this week, there wasn't much movement up the leaderboards of the Prescott Frontier Days Rodeo after Saturday afternoon's performance.

Bull rider Gunar Ramsey moved to fourth in the bull riding with his ride of 84, and Jace Garrett's 81 in the saddle bronc riding was good enough to move the Nebraska cowboy up into the event's top-five.

Other than that, however, leader boards remained relatively unchanged, and for only the second performance of the week, no area cowboys or cowgirls suited up to ride.

The leader of the state of Arizona was in attendance Saturday afternoon, taking in the scene at "The World's Oldest Rodeo."

Gov. Jan Brewer received a standing ovation from the crowd when rodeo announcer Randy Corley made her presence known, and the ovation lasted a good 10 to 15 seconds.

Also in attendance was new Yavapai College men's basketball coach Eric Fundalewicz, who, along with his family, rode in a wagon pulled by the Diamond Z Ranch English Shire horses.

A large contingent from The Orme School was also in attendance, and received special recognition from Corley prior to the rodeo's grand entrance for their always-loud ovations.

Because of the Professional Rodeo Cowboys Association (PRCA) schedule during this week, affectionately called "Cowboy Christmas" for the vast options it presents competitors, there were once again large amounts of riders who were scheduled to appear, but didn't.