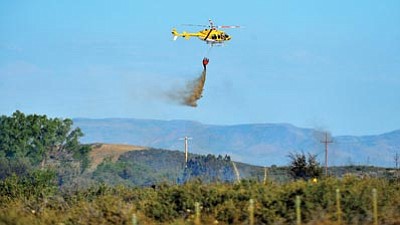 Matt Hinshaw/The Daily Courier<br> A helicopter drops a bucket of water on a brush fire near Mayer Friday afternoon.

A wildfire possibly started by a vehicle dragging a chain burned 65 acres in about three hours Friday afternoon in Poland Junction, with hot, dry winds fanning flames as high as 50 feet.

Mayer Fire Battalion Chief Mike McGhee said his department responded to three different fires in the same area on Highway 69. "This is just a guess, but it was probably a trailer dragging a chain. On I-17 when we get seven or eight fires (together), that's normally what happens," he said. "We had three separate fires with eight different exposures (homes) that we had to protect, so we had to get an engine for each one of those."

Winds moved the fire quickly as it began to move north off of Highway 69, McGhee said. He said Mayer Fire, which was incident command, had more resources coming but was able to cancel them as they brought the fire under control.

One vacant home had brush right up to the house, McGhee said, and would have burned to the ground if firefighters had not protected it.

Fire crews were able to keep the flames from approaching the other seven homes, and no structures burned.

McGhee said crews would work through the night to contain any hot spots and make sure the fire was completely out.