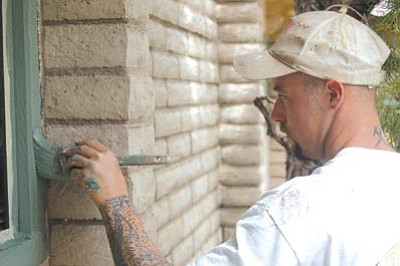 Jason Soifer/The Daily Courier<br> Jeremy Benjamin, a painter for Paint Works in Prescott, paints some trim at a business park in the city.

Tom Reilly understands the intent of a new federal law is to protect people against the risks of lead-paint poisoning.

But Reilly, a Prescott-based contractor, believes the Environmental Protection Agency's new rules on doing renovation projects in homes built before 1978 goes too far.

"The intent is to protect people," he said. "How they go about protecting people - the rules and the regulations that they make up and the fines that they put in place and their ability to enforce this - I think has gone overboard. It is very poorly planned."

Another part of the new rules, which the EPA originally set to take effect this past April and then changed to Oct. 1, is what has some contractors, such as Reilly, concerned.

That's because contractors with jobs on properties built in or before 1978 must first get certification and follow certain practices to prevent lead contamination, which means additional costs to them and their customers and potentially hefty fines to contractors who don't comply.

Contractors will be required to take a lead-safe work practices training class, get their certification and take a number of steps on job sites, including wearing hazardous material suits.

As Reilly sees it, the costs for relatively simple projects could skyrocket.

The new rules potentially impact thousands of homes in the county.

An EPA spokesperson said Thursday morning that lead-based paint contamination is the primary source of lead poisoning in the nation.

The spokesperson said the agency is going to rely on tips and complaints from people, and violators could face fines up to $37,500, depending on the infraction and if the business owner has a history of violations.

The agency began reaching out to various organizations in 2008, sending e-mails and mailings to more than 1,000 trade organizations and magazines, unions and property management associations nationwide to get people trained and certified, according to the spokesperson, who went on to say the agency estimates the cost of containing, cleaning and verifying that the cleanup was done correctly is between $8 and $167 per job.

Locally, nearly 40 Yavapai County Contractors Association members recently spent $185 to take a course and paid an additional $300 for their certification.

Sandy Griffis, executive director of the association, said there is no mercy with this law.

"The law is a double-edged sword," she said. "The EPA says it is more interested in teaching firms how to comply with the rule than busting those who don't, but time will tell."

Griffis wonders how the EPA will police it, and said compliance is going to add to the cost of doing business.

Reilly shares some of Griffis' concerns.

"I think that the EPA has a tendency to over-regulate," he said.