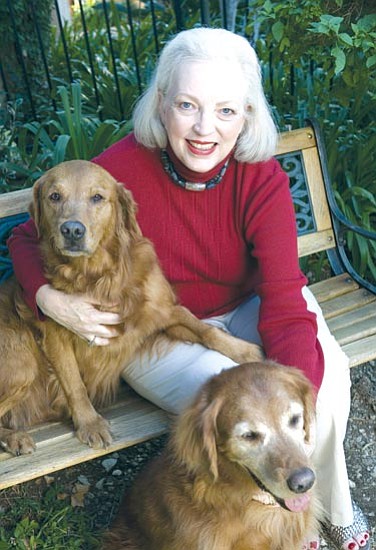 Jance, an avid animal-lover, will be speak about her career as an author of murder mysteries that include readers' favorite characters Detective J.P. "Beau" Beaumont, who has appeared in 14 bestselling mysteries, and Sheriff Joanna Brady, who does her stealth work in Arizona's Cochise County. Jance's latest book, "Trial by Fire," has several scenes set in Prescott.

Jance, who grew up in Bisbee and has a bachelor of arts degree from the University of Arizona, was turned away when she tried to take a creative writing class because she was a girl.

That was back in the 1960s, when girls were supposed to be nurses or teachers, she says. As an alternative, she married a man who was allowed in the writing class and put her own ambitions on a shelf. She didn't pick up paper and pen again until many years later when she was a divorced single mother selling life insurance to stay afloat.

She wrote her first three books between 4 and 7 a.m. until it was time to get her children ready and off to school and head for her desk job. In 1982, she wrote a "slightly fictionalized" version of a series of murders that happened in Tucson in 1970. Since she had never been able to take a fiction writing class and learn the tools of the art, rejection slips carried editors' comments that "parts that were real were totally unbelievable and the parts that were fiction were fine."

Jance said her agent had a tête-à-tête with her about her talent for writing fiction rather than non-fiction and urged her to give it a try, she said. Her career took off with that conversation, beginning with her first Detective Beaumont book published in 1985. In addition to her "Beau" books, she has written eight Joanna Brady novels and two other thrillers, "Hour of the Hunter" and "Kiss of the Bees." The latter reflects what she learned during the years she taught on the Tohono O'Odham Reservation west of Tucson.

She said in an e-mail to The Daily Courier, "I write murder mysteries - the kind of books you can buy at better bus depots everywhere."

However, her website reveals otherwise, noting her many appearances at author events at top bookstores and her listings on the New York Times bestseller list.

The Yavapai Humane Society's Tea and Mystery afternoon begins at 1 p.m. at the Prescott Resort and Conference Center. Tea, scones, finger sandwiches and desserts will be included in the admission price of $35 per person. Tickets are available in advance by calling the Humane Society at 445-2666, ext. 12.

Jance will sign "Trial by Fire" for audience members, as well as any of her other books they bring to the event. All proceeds from ticket sales will benefit the Humane Society, and Jance will donate a percentage of her book sales at Tea and Mystery to YHS to help support its mission of promoting the welfare and humane treatment of companion animals.