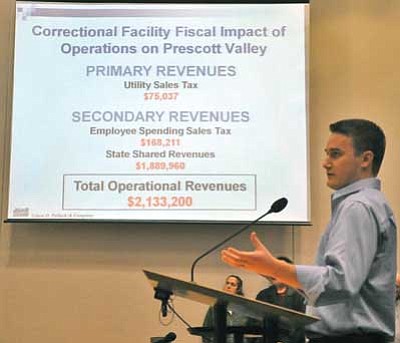 Matt Hinshaw/<br>The Daily Courier<br>Danny Court an Economic Analyst with Elliot D. Pollack and Co. presents his companies findings to the Prescott Valley City Council on the economic impact a private prison would have on the town Thursday night during a Town Council meeting in Prescott Valley. <br/>

PRESCOTT VALLEY - The Town Council majority has taken a stance to oppose a private prison in the community without taking a formal vote on the matter.

Mayor Harvey Skoog spoke out Wednesday against a proposal by Corrections Corporation of America to build a prison with a maximum of 5,000 beds off Fain Road near the Grapevine Industrial Park.

Vice Mayor Lora Lee Nye and council members Mike Flannery and Fran Schumacher followed Skoog's lead Thursday evening by adding their voices in opposition. They cited widespread opposition from the public as well as the stigma of a prison locating in the community, even though they realized it would create badly needed jobs.

Three other council members - Rick Anderson, Patty Lasker and Harold Wise - did not speak out at Thursday's gathering.

Nye expressed concerns about the proximity of the prison site to Quailwood and other subdivisions, and commented, "I will not support this project, and I'm your voice."

Nye, Flannery and Schumacher drew applause from audience members at a meeting that drew about 200 people, including several prison supporters.

They spoke out after Jim Rounds and Danny Court of Elliott D. Pollack & Co. of Scottsdale gave a presentation on the economic effects of a 5,000-bed prison in the community. The Prescott Valley Economic Development Foundation, which has conducted talks with CCA officials, hired the firm to do the study.

While the council majority opposition might have dealt a severe blow to the proposed prison, Brad Wiggins, senior director of site acquisition for CCA, said he has not ruled out the location.

"It is the case that this is the process that people have to be heard," Wiggins said after the council discussion. "We will continue to evaluate the options, whether it be here in Prescott Valley or some of the other sites we are working on" in Arizona.

Wiggins said he will report back to corporate headquarters in Nashville, Tenn., and talk to executives there "and decide whether to move forward with our educational program."

Wiggins continued, "We will consult with the local leadership group and the other supporters we have here."

He said he is not sure when CCA officials will decide what course to take. CCA officials also have met with civic leaders in Winslow and other communities.

Prison opponent Tom Steele said afterward he does not think the issue is dead.

"What I hear is three people against it" on the council, Steele said. "Until they kill it, four votes will pass it. We did not hear from three council members (Anderson, Lasker and Wise)."

The council previously pulled from Thursday's agenda a proposal from Town Manager Larry Tarkowski to pay $9,000 to a research company to conduct a telephone poll on public opinion about the prison.

"I am disappointed in the leadership for not allowing the process to take place," he said afterward. "I don't think they got an accurate read on the community."

The Fain family, which is trying to develop their land into an industrial park, faced widespread opposition just over two years ago after Management & Training Corp. of Centerville, Utah, considered the same site for a prison. The council opted in October 2007 not to proceed with the process.