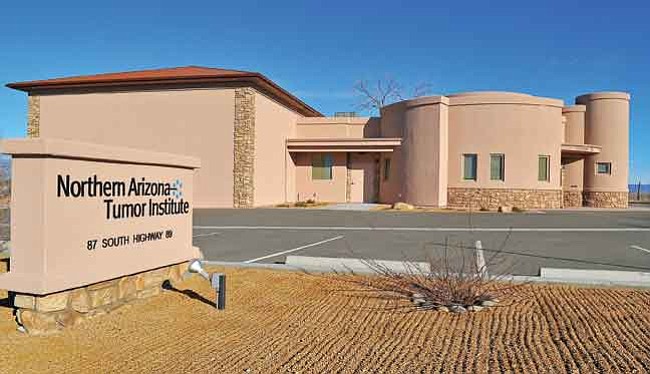 Matt Hinshaw/The Daily Courier<br> Chino Valley's Economic Development Committee will propose an architectural design and review plan that also will include landscape design and the characteristics of the town's buildings. Newer buildings in town like the Northern Arizona Tumor Institute show the difference in designs currently used in the town's commercial buildings.

Town Manager Jerry Stricklin told the Mayor's Economic Development Committee members that he wants to create a slideshow for residents to pick which type of buildings they'd like to see built in the future. This would be part of a proposed architectural design and review plan that also will include landscape design and the characteristics of the buildings.

"I want to involve the community from the start to learn where we're going architecturally," he said. Three of the newer buildings in town - Chino Valley Animal Hospital, Headington Plaza and the Northern Arizona Tumor Institute - show the difference in architectural designs being used in the town's commercial buildings currently.

Stricklin added, "I have an image of what I think these (commercial and industrial) buildings should look like, but it may be different than what our residents want."

Once a slideshow is put together, the town, in cooperation with the Chino Valley Area Chamber of Commerce, will hold meetings to get residents' comments on the designs.

Cecilia Watts, administrative assistant, urges residents to send their photographs of commercial and industrial buildings that resemble what they want built in Chino Valley to cwatts@chinoaz.net.

On Tuesday, members of the Mayor's Economic Development Committee said they favor the town's proceeding with creating higher standards for commercial and industrial developments, but not for residential.

"Commercial developments and higher standards are one thing; residential is another," Committee member Dan Main said.

Charlie Arnold, Bright Star operations director, reminded those present that the median price of homes in Chino Valley is now $153,000, while the average house built in Bright Star now sells for $145,000. The current town fees for building a house in Chino Valley average $10,000.

"I like the way Bright Star II and III look with the newer standards. They are a good model to follow," Arnold said. "However, I question if we can afford higher standards with the homes at the price they are at currently."

Stricklin said, "We've got to decide where we want to be. If the community doesn't feel the commercial district should have higher standards, then rusty barbed wire will be the norm. However, if we want to attract higher users, we've got to be able to assure them the rusted chain link fence won't be next door. If we have no standards, we've got to accept what we get."

The committee members agreed with Main when he said, "On commercial I have no dispute on higher design standards."

If the town sets higher design standards, it's got to be able to attract industry that pays more than retail wages, Arnold added.

Stricklin said with 65 square miles inside the town's boundaries, "to presume there will not be another mall here, you're not thinking very far out. There will be some community points that will be as valuable or more important than in Prescott or Prescott Valley."