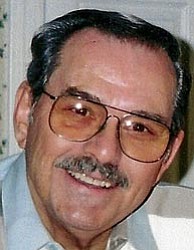 He was full of life and a dedicated family man. He married Jeannine Elisabeth Quart on Christmas Day, 1952. Two sons were soon to follow, Russell Lee of Arvada, Colo., and Ricky Lynn of Peoria, Ill. He was preceded in death by his wife, Jeannine, on Nov. 9, 1996; his oldest son, Russell, on Jan. 28, 2002; and his parents, Harvey and Alberta (Rockett) Jackson, in 1996.

Richard married Rose Weber in July 1997. She was by his side when he passed from this world to the next. He has four grandchildren, Zac Jackson, Waylon Jackson, Kalib Jackson and Jolie Jackson. He has a niece, Jerry, and a nephew, Joe, as well as a stepson and wife, Brian and Rhonda Weber; a stepdaughter and husband, Gail and Greg Siebers; and their three daughters, Julie, Jennie and Joy Siebers.

Richard preferred to be called Dick. He always had a home remodeling project ongoing or was planning the next house he wanted to build. His passions were woodworking, boating and horses. Dick started working in a lumberyard in Carmi, Ill., soon after marrying Jeannine. He moved his young family to Peoria, Ill., where for many years worked for Carver Lumber. On weekends, it was boating on the river, weather permitting, small game hunting with his sons or building something with wood.

In 1973, Dick and Jeannine built a home and barn in Brimfield, Ill., on five acres where they added four horses to their family. He was on the Peoria County Sheriff's Posse for many years and a member of the Masonic Temple.

In 1979, he went to work for Boise Cascade and moved to Loveland, Colo., commuting to Denver daily to his job. He and Jeannine built a beautiful and much larger barn for their horses on acreage. In 1989, Boise Cascade transferred him to Phoenix, Ariz., where, in 1996, he retired.

In 1997, he married Rose Weber. They lived in Mesa, Ariz., until moving to Prescott, Ariz., where they built a new home. Dick and Rose joined Prescott Christian Church.

Dick had suffered a heart attack in November 1997 and, after recovering, remained on heart medication. They enjoyed traveling until Dick was diagnosed with Alzheimer's in 2004. He went to live at Margaret T. Morris Care Center where he received loving care until his death.

In lieu of flowers, send contributions to Margaret T. Morris, a non-profit organization or to the local Alzheimer's Association.