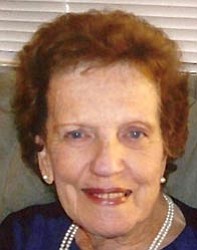 My precious mother, Barbara Joan Dodson, went home to her Lord and Savior Jesus Christ on January 1, 2010. Widowed twice, she leaves behind her daughter, Judy Willis, and son-in-law Darrell Willis of Prescott, Ariz. Her daughter, Joan King of Tempe, Ariz., preceded her in death in 2003. She also leaves behind her loving grandchildren Melissa Radcliff of Mesa, Ariz.; Cassandra Pewitt of Chandler, Ariz.; Joel King of Scottsdale, Ariz.; Jared Willis of Prescott; and Carissa Dunbar of Prescott. She also leaves four special great-grandchildren, wonderful step-family members, and a sister, Patsy Gillam of Reedsport, Ore.

Barbara loved her Lord and had given her heart to Jesus in her 20s. She had been serving as a greeter at First Baptist Church of Prescott and enjoying her friends in the "Joy Class."

Barbara passionately loved her family and seldom missed any "event" of any kind. She was a fabulous afghan maker and pie maker. She was a grocery checker at Central Commercial for many years in Kingman and then she opened a high-end children's clothing store called "Barbie's Tots to Teens".

A celebration of Barbara's life will be held at 3 p.m. Sunday, Jan. 3, 2010, at the Solid Rock Center of First Baptist Church, 148 S. Marina St., Prescott. Officiating will be the pastor to seniors, Gary Carman.

Hampton Funeral Home was entrusted with the arrangements. Please visit www.hamptonfuneralhome.com to sign Barbara's guestbook or leave a message for the family.