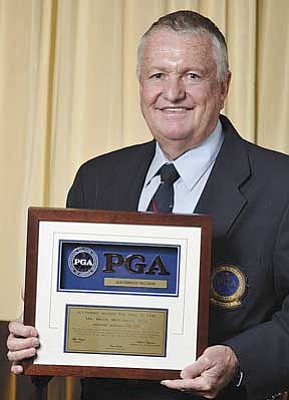 PRESCOTT - A veteran golfer and one-time golf professional at Antelope Hills Golf Course is back at the city course - this time as general manager.

Prescott City Manager Steve Norwood announced this week that he has appointed Mack McCarley as manager of Antelope Hills.

McCarley, who served as head golf pro at Antelope Hills from 1970 to 1981, returned earlier this month to work as interim manager.

Although the city already had received about 70 applications from people interested in the permanent job, Norwood said he decided to halt the selection process and appoint McCarley.

Initially, "Mack offered to do a brief agreement to help screen applicants," Norwood said. "After a few weeks, he said, 'Would you consider me permanently?'"

At that point, Norwood said he opted to stop the manager search and appoint McCarley.

"Credential-wise, there's nobody better," Norwood said. "Mack is a known quantity, and he knows Arizona golf."

McCarley, 70, is a recent inductee into the Arizona Golf Hall of Fame and long-time PGA member, and has about 40 years of experience working in the golf industry.

After leaving Prescott in 1981, McCarley said he moved to the Phoenix area, where he worked as director of golf at the Phoenician Resort and the Superstition Springs Resort. In 1990, he took a job with a Denver-based golf development company that financed and built courses all over the U.S.

McCarley later returned to the Phoenix area to work as director of golf at Sun Lakes, before teaching for several years at the Golf Academy of America in Chandler.

For the past eight years, McCarley said he has been largely retired, although he worked recently as a teaching pro in a suburb of Salt Lake City.

McCarley headed back to Prescott after hearing from Mayor Marlin Kuykendall, who approached him about a job at Antelope Hills.

At that time, McCarley said he was not interested in taking on the manager position, but he did agree to a temporary consulting job.

Then, after Kuykendall and Norwood "shared with me their vision for Antelope Hills - about how it could play a role in tourism promotion - I got excited and said I want to be a part of it," he said.

Among McCarley's goals for the course is to give locals a "pride of ownership" and to foster an atmosphere that helps players "have as much fun as possible, so they want to come back."

In addition, McCarley said, "We haven't even scratched the surface of what we can do with tourism and marketing. That's a high priority with me."

A native of Litchfield Park, McCarley has a bachelor's degree in mass communications from Arizona State University.