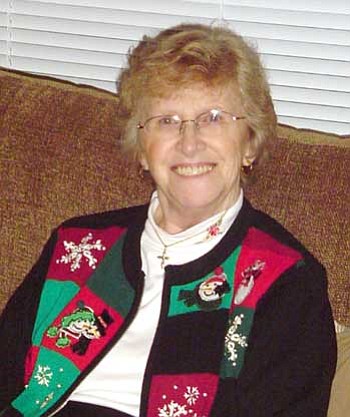 Patsy Jo Leiding entered into heaven on Tuesday, Feb. 16, 2010, after a courageous battle with cancer. She was born on Aug. 13, 1937, in Grand Junction, Iowa, to Maxine (Henderson) and Harvey Davis.

She graduated from Oelwein High School, Oelwein, Iowa, in 1956 and attended college at Iowa Lakes Community College in Estherville, Iowa. She married Arnold Fischer in February 1956, and they had three children. She loved being home taking care of her children, home and family. Later, she went to work and held several jobs always seeking to provide a better life for her kids.

Patsy and Edwin Leiding married on July 1, 1978; and they relocated to Prescott Valley. Patsy retired from Emerson Electric Motors in 1992. She and Edwin shared many activities together, from bird watching to camping in their fifth wheel to just seeing where that unknown road would take them. She also enjoyed her church activities shared with Edwin as well as the variety of ladies groups to which she belonged at Trinity Lutheran Church.

Memorial services will be at 11 a.m. Saturday, Feb. 27, 2010, at Trinity Lutheran Church, 3950 North Valorie Drive, Prescott Valley, Ariz. Memorials may be made to the charity of your choice.