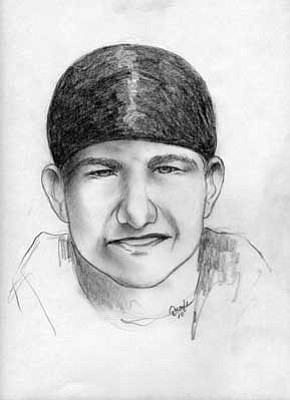 Prescott police released a photo and sketch of a suspect in the stabbing of a woman last week in downtown Prescott and seek the public's help in finding him.

Police captured the photo of the suspect from video and an artist drew the composite sketch of the suspect as described by the victim, said Lt. Andy Reinhardt, spokesman for the Prescott Police Department.

Experts are trying to enhance the photo, Reinhardt said.

At 9:20 p.m. on Feb. 10, a Prescott woman walked down the alleyway between Montezuma and Granite toward the parking garage when a man she did not know approached her just outside the pedestrian entrance to the parking garage, Reinhardt said.

"The suspect had just walked past the victim. The victim thought he was going toward a restaurant and she said it was closed," Reinhardt said. "He followed her as she continued walking toward the parking garage."

The suspect did not say anything to the victim, but stabbed her once with a knife when she turned around to see if he had followed her, Reinhardt said.

Police describe the suspect as a Caucasian male in his early- to mid-30s weighing about 200 pounds and standing about 5'6" tall. The man wore a white windbreaker jacket, blue shirt, blue jeans, and an unknown-colored baseball cap.

The suspect fled northbound toward Gurley Street in a red and white or red and silver two-toned, late 1990s long-bed Ford pick-up truck with an extended cab, Reinhardt said.

Anyone with information about this incident should call Detective Sutton at (928) 777-1920. You can remain anonymous by calling Yavapai Silent Witness at 1-800-932-3232 or texting your message to Busted 411247. If your information leads to the arrest of the suspect, you may be eligible for a cash reward.

Police do not know the motive for the attack at this time.