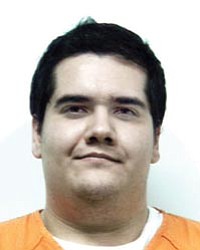 Prescott Valley police arrested a Phoenix man on Feb. 9 after he had sexual contact with a 13-year-old girl at a local motel, a spokesman said.

Officers booked Sergio Barrera, 23, into the Camp Verde jail on charges of two counts of molestation of a child.

The father of the girl told Prescott Valley police on Feb. 7 that he thought his daughter had sexual contact with a 23-year-old man she met through an Internet social networking site.

Officers investigating the incident confirmed that Barrera corresponded with the girl via computer and later met her at a Prescott Valley motel where he engaged in sexual conduct with her, said Sgt. Brandon Bonney, spokesman for the Prescott Valley Police Department.

Barrera allegedly made several incriminating statements to detectives about his involvement with the victim, Bonney said.

Further investigation indicated there are other victims in this case, so detectives continue to examine evidence and conduct additional interviews, Bonney said.

"We urge parents to keep an eye on what their kids do and where they go online," Bonney said.

Talk to your children about dangers on the Internet, monitor their online activities, and check on them while they use the computer, Bonney said. Remember that children can use phones, game systems and iPods with Internet capabilities to communicate on the web.

Some web resources for parents to read before talking to their children include www.internetsafety101.org and www.missingkids.com, Bonney said.