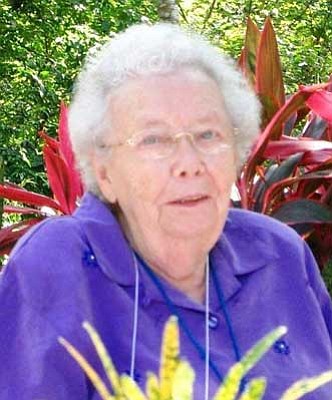 Bettie Jane (Johnson) Conley was born Feb. 3, 1923, in Kimball, S.D., to Charles J. Johnson and Laura Mae (Will) Johnson. She attended grade school and high school in Kimball, graduating in 1941. From there, she went to a business college in Rapid City and worked for the U.S. Civil Service in Washington, D.C. In 1942, she transferred to Seattle where she married her high school sweetheart, James Dwain (J.D.) Conley, on March 5, 1943.

They returned to Kimball in 1946 and became the owners of Kimball Dairy. After a couple of years of life on the farm, Bettie Jane joined Stanley Home Products Inc. To her, hosting Stanley parties and recruiting new dealers would be an easier way to make a living - better than milking cows! Soon after joining, she convinced her husband to come on board with Stanley - this led to a 25-year sales career. Stanley took them from South Dakota to North Dakota, then joining Stanley's foreign sales department in Calgary, Alberta, and Vancouver, British Columbia, and back to the USA in Phoenix, Ariz., and ending in Waterloo, Iowa.

At age 49, Bettie Jane and J.D. purchased a mom-and-pop motel in Prescott, Ariz. This was a bit of a change from the sales work she was used to! Missing interacting with people and the sales bug she had acquired working all those years at Stanley led her in a new direction - real estate. It didn't take much convincing from her husband (already in real estate) to stop making beds and start selling houses. In 1974, she became the first woman to be hired by the Pauley and McDonald Realtor group and, in 1979, J.D. and Jane started A-Action Realty. Real estate was so much more than just selling houses. It opened doors to many opportunities and Jane embedded herself within the Prescott community.

She loved to socialize and could usually be heard laughing wherever she went. Bettie Jane was nonstop her entire life - she was even given a charm for her bracelet engraved "too busy and don't have time" - but she was always on time, and for those who knew her and worked with her, she made time. When she did take time to relax, you would probably find her playing cards, crocheting, reconstructing clothes, or baking. She loved purses, shoes, and the color purple. She never threw anything away - if you needed ANYTHING, she probably had it in her purse!

She was preceded in death by her brother, Donald M. Johnson, of Livermore and granddaughter Ragen Nuttall of Scottsdale.

The family invites you to sign on and give your thoughts at www.ruffnerwakelin.com.