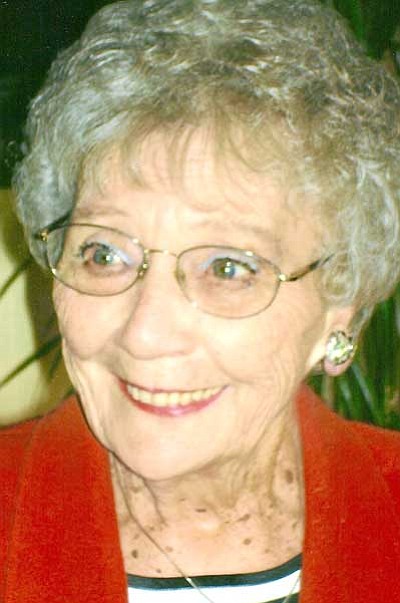 Marge Mackin passed away peacefully with her family present at YRMC on Feb. 14, 2010, at age 95. She was born on March 14, 1914, in Toronto, Canada, to Thomas Falkard and Sarah Foxcroft Falkard, both from England.

The family moved to Redondo Beach, Calif., when Marge was 6. She and her younger brother, Ted, loved swimming in the ocean and exploring Palos Verdes estates which were covered in brush and wild goats. In 1932, she graduated from John Muir High School in Pasadena, Calif., where she excelled in many sports and was editor of the school newspaper. Because of the Great Depression, Marge took a job waitressing in Los Angeles. The Hassayampa Hotel in Prescott was advertising in L.A. for an experienced waitress, and they paid her railroad ticket to Prescott. Later she met Lester Mackin whom she married in 1935.

Since 1938, she lived in the same rock house where she and Les raised their four children, born over a span of 20 years. She felt that she would never escape her involvement with Miller Valley School PTA. In addition to being a homemaker, Marge held a variety of jobs, including interviewer for the Gallup Poll, running the odds board and selling wagering tickets at Prescott Downs, being a Welcome Wagon greeter, a sales person in the fabric departments of Coronet and Smith's Fabrics, a clerk at Prescott Pharmacy, volunteer at the Chamber of Commerce and columnist for the Daily Courier. Her creativity expressed itself in her stained glass creations and sewing. She was a skilled seamstress and made many of her family's clothes. She was always nicely dressed and loved to wear pieces of her large collection of old and new turquoise jewelry. Marge loved to walk, dance and travel to foreign countries. She will be remembered for her wonderful vim and vigor, sense of humor and singing old songs like "Red Lips, Kiss My Blues Away," quoting phrases such as "Think of it as an adventure," in response to any situation, and creating personalized birthday poems which she wrote in greeting cards to her family.

Mass will be celebrated at 12:30 p.m. on Thursday, Feb. 18, 2010, at Sacred Heart Church in Prescott, Ariz. In lieu of flowers, donations may be made to People Who Care and Yavapai Humane Society.