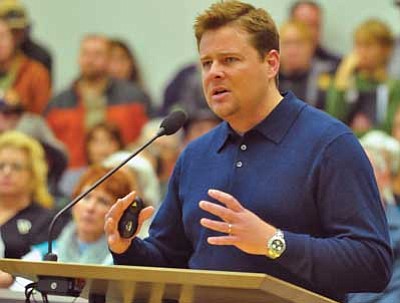 Jim Rounds Senior Economist with Elliot D. Pollack and Co. presented his companies findings to the Prescott Valley City Council on the economic impact a private prison would have on the town January 28 during a Town Council meeting in Prescott Valley. Corrections Corporation of America is no longer considering land in PV for a prison because of opposition from the Town Council.<br> Photo courtesy of Matt Hinshaw/The Daily Courier

The Corrections Corporation of America has notified the Prescott Valley Economic Development Foundation that it is officially withdrawing its site selection activities for a proposed prison in Prescott Valley.

PVEDF Executive Director Gary Marks said despite CCA withdrawing, he thinks other prison companies will continue to look at the Quad City area.

"The geography, logistics and labor force all come together for Western Yavapai County, that's why they keep coming back," he said. "It's not because we're sending them a letter. They come because everything fits."

Last year, Marks said, CCA approached the town through a consultant who did not disclose the type of industry. Then he had to sign a letter of non-disclosure for 12 weeks while the company continued to assess the area's suitability for the prison. During that time community leaders and business leaders heard from the company about its proposal.

Marks reiterated that he feels PVEDF would have been negligent not to at least present the proposal to the community, because of the current economic climate and because it was a different company approaching Prescott Valley.

"My job is not to be judging (the type of industry). It is to look at the opportunities of capital investment and jobs. We did our work the way we were supposed to, putting together the data and presenting the opportunity.

"Not getting the jobs for the people in the community who need and want the jobs is what gets me. I hate to see us not have the opportunity for jobs," he said.

Following a Wednesday, Jan. 27, statement by Mayor Harvey Skoog and statements during the council meeting of Jan. 28, when three councilmembers voiced opposition to the prison proposal, PVEDF cancelled plans for educational forums on Feb. 9 and 21.

Councilmembers Patty Lasker, Rick Anderson and Harold Wise had no comment about the prison during the meeting, although Lasker has previously publically stated she was in favor of the proposal after hearing more about it and visiting a similar prison in Eloy.