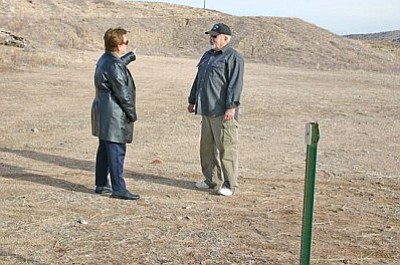 Chino Valley has an opportunity to become home to an 80-acre regional shooting range.

A month ago, the Chino Valley Town Council authorized the police department to apply for and accept a shooting range development grant up to $50,000 from the Arizona Game and Fish Commission to improve the safety and usability of the department's gun range.

Chino Valley Police Cmdr. Mark Garcia said the department's current range in the southeast corner of Old Home Manor near Perkinsville Road isn't much. "We just shoot into a dirt bank," he said.

Currently, there is a multi-station pistol range and 100-yard rifle range at the site.

Other improvements the grant will provide for include adding concrete sidewalks at designated shooting lines; compacting decomposed granite between the sidewalks to reduce weeds and make cleanup easier; constructing a covered area over part of the shooting lanes; adding a pre-constructed storage building to store frames and supplies; and installing signs at the entrance and within the range.

The improvements at the range, Wynn said, would enable the department to also open it up to public use. Now, the police use it and trainers conduct special hunter safety classes.

Because of the shooting range's current condition, Garcia said the department only gets a few calls from residents wanting to use it.

Wynn said since the department submitted its grant application it has been receiving calls from the Arizona Game and Fish asking if the department would consider expanding the shooting range and making it into a regional facility. The Gunsite Academy and the Chino Valley Area Chamber of Commerce support the proposal, he said.

Mark Fricke, Prescott Sportsmen's Club's range director, said the club, which has 800 members, supports the proposal. During the past decade, 4,000 shooters have used the range.

The club has been operating a shooting range on the Prescott National Forest just west of Prescott since 1957, but its lease expires in 2014 and the Forest Service will not renew it because it now is next to a subdivision.

If the Sportsmen's Club doesn't end up in partnership with Chino Valley on this shooting range, the club will probably proceed with building its new range on its Cherry site. Participating as a partner in the project would be a way for the Prescott Sportsmen's Club to get a new shooting range quicker, he said.

The club, he said, needs to know the town is willing to sit down and talk. It is willing to operate the shooting range at no cost to the town.

"I feel this would be really good for the community," Norman Freeman, Chino Valley resident and member of the Arizona Game and Fish Commission, said. "It would be a real exciting thing for Chino Valley."

A regional shooting range would eliminate the wildcat-shooting going on in the town now, Game and Fish Commissioner Robert R. Woodhouse told the council. He said Chino Valley is way ahead of most communities because it owns the land.

Anthony Chavez, Game and Fish's statewide shooting range manager, said the site is ideal because there is a 40-foot-tall ridge to the west of the site.

Freeman said an 80-acre shooting range allows a diversity of activities and would bring local sportsmen, as well as competitors, from other areas in the state.

The Old Home Manor site, he believes, could be used for 15-20 years before the proposed highway goes near that area. The grant calls for a 10-year commitment.

The Department of Public Safety and Arizona Fish and Game officers could benefit from an improved shooting range in Chino Valley as well as other law enforcement officers in the area.

The council authorized the police department and town staff to continue negotiating with the Game and Fish staff to develop an intergovernmental agreement and asked the Prescott Sportsmen's Club to get facility use and economic impact information and bring it back to the council.