Man sentenced to jail and probation for PV church burglary 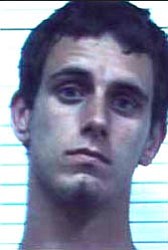 In early July, a parishioner watching over the prayer room that's open 24 hours a day called police from the church in the 7900 block of Dana Drive saying he heard noises that sounded like someone trying to break into his vehicle in the parking lot, said Sgt. Brandon Bonney, spokesman for the Prescott Valley Police Department.

When officers arrived, they didn't find anyone near the parishioner's vehicle, but they did find a broken window in the back of the church that led them to believe a burglary was in progress, so they surrounded the church and announced they were sending in a police K9 Bonney said.

Officers learned that Joshua Taylor, 18, of Battleground, Wash., and Maurer, 20, of Washington and Prescott Valley broke into the church to steal money, coins and jewelry, then kicked in doors, broke windows, crucifixes and statues, and tried to break into a safe, Bonney said.

Defense attorney Kennedy Klagge said Maurer "admitted he was under the influence of alcohol. If he wasn't drinking, this event would never have occurred."

Kiger asked Maurer if he had anything to say.

"I've already learned my lesson, and I want to put things right in my life," Maurer said.

Kiger also ordered Maurer to pay restitution to the church and its insurers of more than $3,900.

Kiger told Maurer, "I'm setting you up for a really hard fall unless you do this right. I'm afraid if you don't make these changes now, the rest of your life is going to be spent locked up."

Kiger told Maurer the terms of his condition include no possession or consumption of alcohol or drugs, and random drug tests.