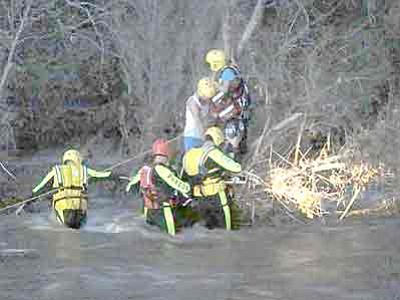 At 5 p.m., deputies answered a call about two teenage boys stranded mid-stream from a man who lived nearby who heard them and saw them stranded, said Dwight D'Evelyn, spokesman for the Yavapai County Sheriff's Office. Within 15 minutes, four firefighters trained in swift-water rescue arrived.

Just after 6 p.m., the swift-water rescue team brought the two teenage boys who were cold and wet but in otherwise good condition safely to shore. Neither teen was taken to the hospital.

The teens, who were wearing T-shirts and shorts and weren't prepared for the weather, told deputies while they were upstream they made a raft with wood they found nearby, D'Evelyn said. The boys rode the raft until they lost control, but were able to make it to a tree in the middle of Beaver Creek where they stayed for about two hours when they were rescued.

YCSO and fire personnel want to remind everyone that entering any swift moving water area is extremely dangerous and potentially deadly.

"Be smart about swift water and stay away from it," D'Evelyn said. "We've had a lot of rain and we're getting more snow. When that melts it will increase the flow of rivers."

Children walking near waterways should always be watched and accompanied by an adult, and everyone is encouraged to stay on established pathways and trails, D'Evelyn added.