What makes an angel? 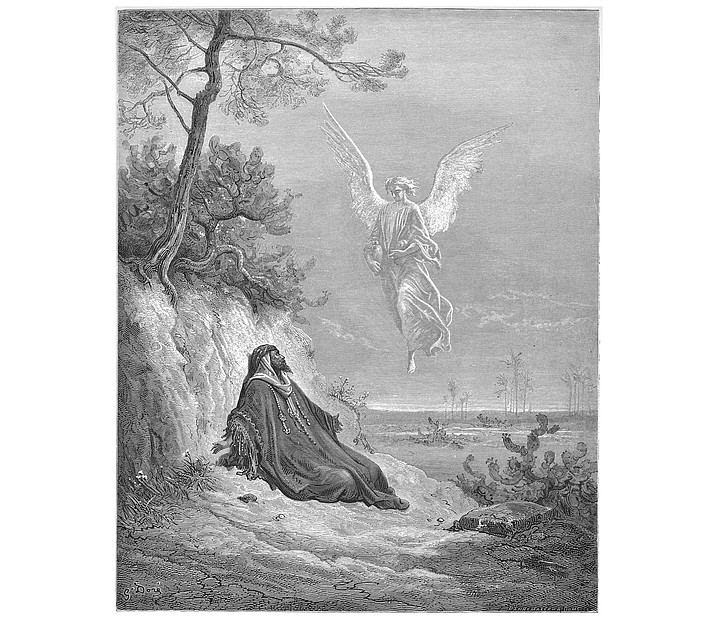 A wood engraving by French artist Gustave Dore, circa 1855, depicting a scene from the Bible in 1 Kings 19:5. An angel comes to comfort the prophet Elijah, who is so discouraged he wishes to die.

This time of year there are millions of youthful eyes searching the night skies for reindeer and sleigh, but there are just as many hearts turned to thoughts of angels and their existence.

Santa's duties and those of angels can sometimes be bestowed upon mere mortals such as you and I.

A few years ago in Wilmer, Minn., for example, I remember reading about multiple sightings of a man dressed in white appearing in shops and businesses at random. Each time he was sighted he performed an angelic act of kindness and then left as mysteriously as he arrived without giving a clue to his identity.

One report came from a young mother who was standing in line at a toy store when the man walked up to the clerk and paid for all the gifts she had selected. He simply said "Merry Christmas" and vanished into the busy parking lot.

Another report came from a movie theater in which the man reached into his wallet with white-gloved hands and purchased tickets for all the children standing in line.

These small acts may not qualify as miracles, but they can be just as powerful in the way they uplift hearts and leave lasting impressions.

One such moment occurred when an unknown angel visited my wife and me when we were a young couple struggling through our first Christmas. We had no food, no money, no gifts and little hope.

Determined to be independent, we had not made our plight known to relatives or friends. We were living in a run-down apartment in a new town that seemed foreign to us both. Just before Christmas there came a knock at the door that revealed an unmarked box on our doorstep. Inside the box we found food, gifts, money and hope. An anonymous card wished us a "Merry Christmas."

How merry it was. The giver may not even know what effect the box had on my wife and me. Their gift gave birth to one our most cherished holiday memories and taught a young couple the power of kindness and giving hands.

This time of year and always, let us share angelic duties by showing common concern for the happiness and welfare of mankind.