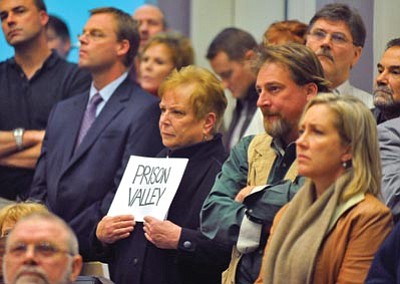 Matt Hinshaw/The Daily Courier, file photo<br> A Prescott Valley resident makes her stance clear with a sign that reads “Prison Valley” during a January 2010 Town Council meeting in Prescott Valley. Representatives from Elliot D. Pollack and Co. discussed the economic impact that a proposed private prison could have on Prescott Valley.

And in both cases, an outcry from the public and lack of support from the Town Council caused the private prison companies - Management & Training Corp. in 2007 and Corrections Corporation of America in 2010 - to seek opportunities elsewhere.

In both cases, the foundation and its allies in the business community and local government cited job creation and other economic benefits of a major employer. The foundation offered land outside the town limits off Fain Road that the Fain family has tried for four years to develop into an industrial park.

However, opponents became even more adamant the second time around, again vocalizing fears about prison escapes, declining property values and other negative effects associated with prisons. Union-affiliated opponents from outside the tri-city area raised concerns about salaries and training in the non-union private prisons.

Foundation officials went public Dec. 17, 2009, after conducting a meeting that day at the StoneRidge country club in which they invited elected officials and business leaders to meet with CCA representatives. The press release quoted support from Mayor Harvey Skoog and others in attendance.

An organized opposition campaign surfaced before 2010 started. Former Councilman Tom Steele and Michael Hendricks, both Tea Party activists, launched noprisoninpv.com to carry out a grassroots campaign to prevent CCA, based in Nashville, Tenn., from pursuing a prison. Steele said he established the Internet domain name Dec. 18, 2009, and circulated 500 fliers against the prison.

Responding to growing opposition to CCA's plans, Ron Fain, managing partner for the Fain Signature Group in Prescott Valley, said, "My only thoughts are is that Fain is a community builder, and we see a need for jobs in our community."

The opponents prevailed over the Fains and the foundation in the battle for public opinion. On Jan. 21, the council indicated it was premature to hire a research company to poll residents on whether they would support or oppose a private prison.

Councilwoman Patty Lasker, the most vocal supporter of the prison on the council, suggested waiting until the state Joint Legislative Budget Committee released the request for proposals to recruit operators for private prisons. The RFP would seek a prison company or companies to fill 5,000 beds at new or existing sites.

In advance of the council's Jan. 28 meeting, the foundation released a 12-page report from Elliott D. Pollack & Co. of Scottsdale that stated a 5,000-bed prison in Prescott Valley would be an economic boon by creating thousands of jobs during construction and operations, and generate tax revenues. A staffer from the firm acknowledged his company relied on data that CCA supplied.

CCA officials tried to win public support by meeting with business groups and hosting tours of their prisons in Florence.

The foundation arranged a tour Jan. 28 for 20 residents of the tri-city area of the Central Arizona Detention Center, which houses inmates for the U.S. Marshals Service.

"You know, I think it is well-run," said Scott Powell, who retired to Prescott Valley in 2006 after working 23 years as a correctional officer with the California Department of Corrections.

Powell, who worked at San Quentin and California State Prison - Los Angeles in Lancaster, said the short stay of the inmates in Florence reduces any security risk.

However, he said, "I have some misgivings about the size of the institution. I would like to see a smaller institution, maybe 1,000 to 1,500 (inmates)."

The prison tour turned out to be too late. On the previous evening, Skoog announced that he would not support the prison.

Council members Mike Flannery, Lora Lee Nye and Fran Schumacher announced to a packed chambers Jan. 28 that they would follow Skoog's lead. They cited widespread opposition from the public as well as the stigma of a prison locating in the community, even though they realized it would create badly-needed jobs.

CCA officials, who acknowledged considering other sites in Arizona, responded to the council's direction by saying they were weighing their options. Brad Wiggins, senior director for site acquisition, notified foundation Executive Director Gary Marks in a letter dated Feb. 5 that CCA was no longer considering the Fain property.

Steele was not convinced, and felt vindicated in his suspicions at the Feb. 11 council meeting after Bill Fain and his son, Brad, announced that they would seek annexation and rezoning of grazing land to accommodate a proposed prison.

The Fains said they were willing to take the issue to the ballot, but they scrapped any plans for the prison four months later.

The escape of three inmates from a prison that Management & Training operates near Kingman July 30 brought fears close to home. Diana Joy Glattfelder, a 43-year-old Prescott Valley woman accused of aiding her ex-husband, John McCluskey, in the days after the escape, pleaded guilty Nov. 30 in attempting to hinder prosecution. She awaits sentencing.

In a recent interview, Steele said that he has maintained the anti-prison website "because I don't believe the issue is totally dead in this area."

Skoog expressed relief, saying he is glad the issue is "over with and the community is happy without a prison."

Skoog said he thinks the foundation has done an "OK job" recruiting employers and hopes it will continue to solicit clean industry.

Marks described the failed efforts to recruit CCA as "one of those projects that never happened."