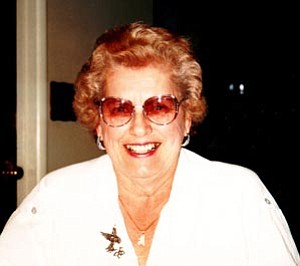 Anna L. Glosek on Tuesday, Dec. 14, 2010, rejoined both her husband Joseph (2009) and daughter Joanne (1993), who preceded her arrival into the welcoming arms of our Lord Jesus Christ.

Anna began her journey through life on Jan. 8, 1927, in Grandview, Ind., as Anna Louise Beasley, the eldest of four children, with brothers Robert, Harry and Kenneth. After graduating from Chrisney High School, she traveled to the bright lights of New York City, where she studied cosmetology and met Joseph, the love of her life. They moved to Southern California where they raised their children, Joanne and Joseph Jr. After a long career with McDonnell-Douglas Aircraft, she retired and they moved to Prescott, Ariz. Anna continued to work into her later years and she especially enjoyed the many friends she met while employed at Wal-Mart.

Anna is survived by her son Joseph and wife Marian; brothers Harry and Kenneth; grandchildren Anna and Sarah; and four great-grandchildren.

Services will be 2 p.m. Tuesday, Dec. 21, 2010, at The Light and Life Methodist Church, 2797 Willow Creek Road in Prescott, with Pastor Doug Pettis officiating.

In lieu of flowers, please donate to Wounded Warriors or the charity of your choice.