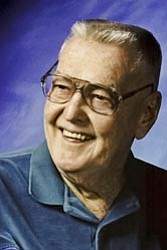 George William Hancock, 88, passed away into the arms of his Lord Jesus Christ on Dec. 10, 2010, at the Pineview Care Home in Prescott, Ariz. George was born in Cleveland, Ohio on Sept. 23, 1922. He was the son of Earl F. Hancock and Ruth L. Hancock (Doherty).

He was preceded in death by his brothers, Edward and Robert; sisters Dorothy Buckmaster (George) and Ruth Johnson (Jerry); and sister-in-law Margaret.

George was raised in Cleveland, Ohio, where he met and married the love of his life, Jeanne. He was a veteran of WWII, serving his country as a 1st Lieutenant in the United States Army Signal Corps stationed in the Philippines from 1942-1945. He then attended Fenn College in Cleveland, graduating in 1949 with a BSS in electrical engineering. Shortly after that, he and Jeanne decided to move to Arizona, where they enjoyed living in the Phoenix area most of their lives. They very recently moved to Prescott.

George worked for the Salt River Project in Phoenix, Ariz., for 33 years, and retired in 1985. He enjoyed his work and the many friendships that were made during those years.

George was a loving and devoted husband, father, grandfather, great-grandfather, uncle and friend. His family was his greatest joy. He had red hair and a wonderful sense of humor to match. He will be greatly missed. The family would like to thank the loving service that the staff of Pineview Care Home showed us all during George's final days.