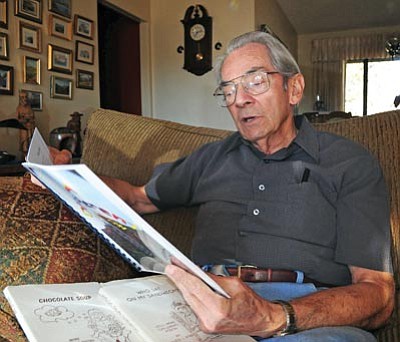 Brett Soldwedel/The Daily Courier<br>David Byrn recites his poetry in his home Tuesday. Byrn has written several poetry books that have been published, and he won several awards in the 2010 Arizona State Poetry Society’s National Poetry Contest.

PRESCOTT - Poet David Byrn said the number 34 is "magic" to him.

"It seems to be cropping up every so often," Byrn said.

Byrn said he was born in 1934, and spent 34 years as a teacher and administrator with the Washington Elementary School District in Phoenix.

Otherwise, there is no rhyme or reason to the number. In fact, many of Byrn's poems do not rhyme as well. They are called "free verse."

"I have what I call an 'eclectic' style," Byrn said. "My poems are not readily identifiable. It includes a lot of children's poetry, free-verse lines, sonnets, haikus."

Byrn said he began writing poems at Phoenix Union High School, where he graduated in 1951. He won a national award for a sonnet.

However, he said he did not become a "serious devotee" of poetry until 25 years ago, after he retired.

The Arizona State Poetry Society helped to pique his interest, he said.

Byrn said he has earned numerous awards for his poetry in state and national contests since 1987. He recently won several prizes at the annual National Poetry Contest of the state poetry society in Cave Creek, including two first-place prizes, one second-place prize, a third-place prize and five honorable mentions.

He earned a first prize for a free-verse titled "Surface Tension," which shows his childlike fascination with water striders, insects that dart across water.

The contest drew more than 700 entries from more than 90 poets from the United States and Canada, said Christy White, society president.

"He is an excellent poet, and he wins (contests) fairly regularly, and not just in Arizona," said White, who has known Byrn for more than 15 years. "He has a real wonderful grasp. It's like color and emotion, or the color of emotion.

"And he is also an excellent sonnet writer," White said. "He applies the rules of writing sonnets very meticulously, and he writes from the heart, not just mechanically."

Byrn said, "I like the challenge of combining words to produce visual and emotional images in the reader, and what I also enjoy doing is making analogies."

He has published several books of poems, including "The Importance of Pickles," "Who Sat on My Sandwich? And "Chocolate Soup."

Byrn said he no longer can type since suffering a stroke in 2007. He writes in long hand and his wife, Diana Hart, a cello player, types them.