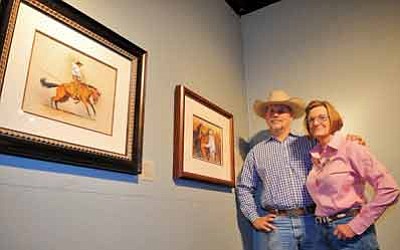 Matt Hinshaw/The Daily Courier<br>Artist Mark Kohler and writer Kathy McCraine have collaborated on a new book, “Cow Country Cooking,” a collection of recipes, photographs, watercolor paintings and cowboy stories that capture the life of the real cowboy and ranching history.

"Cow Country Cooking: Recipes and Tales from Northern Arizona's Historic Ranches" is more than a collection of culinary concoctions.

Rather, the book is an ode to the real working cowboy and the history of ranching in northern Arizona.

Its authors, Kathy McCraine, well-known writer and Prescott resident, and Mark Kohler, an acclaimed watercolorist who lives in Texas, came to writing the book serendipitously. McCraine, who is on the Phippen Board of Trustees, had been an admirer of Kohler's artistic talent, and she decided to seek him out at the Phippen Museum Western Art Show and Sale in Prescott in 2007.

"I decided to walk up to him and tell him I liked his work and told him he should do more work in Arizona - and he did."

The large, historic, working ranches are not amenable to uninvited guests - artists, for example - who just show up with the desire to capture their people and landscapes on canvas, Kohler said. Fortunately, McCraine, who with her husband, Swayze, owns the Camp Wood Cattle Company north of Prescott, has many friends in ranching circles. She told Kohler, "There are a lot of neat ranches you could go to. I could take you there."

Kohler seized the "in" that McCraine offered, and when they were on their way one day to a big ranch, they shared their commitment to preserving the traditions and history of the people and the ranches that are the heart of the West.

As they traveled along, a thought occurred to them. "Why don't we do a cookbook?" and "it fell together because of this common interest," Kohler said.

What evolved was a compilation of both McCraine's and Kohler's photographs, his watercolors, history of ranches, and stories from cowboys that McCraine had been collecting for years. Since Kohler had many ranching friends in Texas, he, too, contributed tales that accompany his artwork.

"The strength of the book is the stories," he said. McCraine added the book is full of "great cowboy stories. Once the cowboys started talking the talk, I was there with my little tape recorder," she said.

McCraine amassed recipes over the years, too. They come from wagon cooks, camp cooks and ranch cooks. "In a lot of cases, people didn't have the recipes written down," she said, "so, I'd watch, write it down and go home and try it out. Some are easy, some are sophisticated," she said.

Cowboy stories abound. "Recollections: Grass-Fed Beef," from Arizona cowboy Lee Pehl is one example of the vignettes that weave through the cookbook.

"Any cook ought to know that a beef rib off grass-fed beef is a terrible thing. But we were at the O RO headquarters eating ribs at the bunkhouse one time, and James was cooking ribs. James was a little, short, fat wormy sucker that wore glasses. He looked like a little troll.

"They'd just butchered, and he'd cut some of those ribs off. So he dumps them in the pot, and they're sticking out of the water by six inches. There isn't enough meat on 'em for nothin.' He's boiling these things all morning. We'd come in to eat, and he'd still be boiling and boiling those ribs.

"Finally, he says, 'I think they're about done. Man, these are good.'

Next he goes over to the sink and dumps the water out, picks up a bottle of barbecue sauce, and 'whish, whish ... here you go boys.'

"It was terrible. The bones were better eatin' than the meat."

The paintings, photographs, cowboy stories and recipes in "Cow Country Cooking" reflect McCraine and Kohler's portrayal "of the real working cowboys who are on a horse everyday, and they have a way they want to work cows. They do it the old way," Kohler said. Rather than check on their cattle from a helicopter, "they hold onto tradition. We search out this special type of person, the little pockets of real cowboys left. They'd do it (cowboying) for free."

McCraine will be on hand for a book signing from 11 a.m. to 2 p.m. on Dec. 11 at Jenny Longhorn Western Boutique on Whiskey Row. The book is also available at the Phippen Museum, where Kohler's paintings in the book are on display in the Cultural Hall, Sharlot Hall Museum, Ogg's Hogan, Savoini's, Olsen's Grain and Four Shoes Farrier Supplies in Chino Valley. It sells for $30. The Phippen Museum will benefit from a portion of proceeds from sales of the book and Kohler's paintings at the museum.