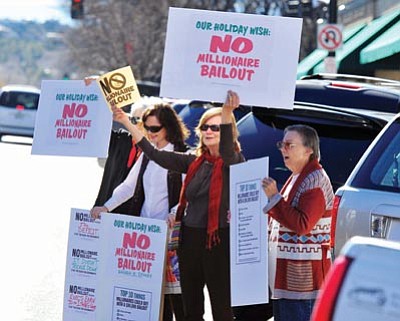 They questioned the fairness of the tax cuts, calling them a $700 billion bailout for the nation's wealthy while an estimated 2 million Americans face the loss of unemployment benefits.

The Prescott chapter of MoveOn.org, a liberal grassroots group, organized the hour-long lunchtime rally on North Cortez Street in front of McCain's office. They held placards with messages such as "Stop the Millionaire Bailout" on the sidewalk and street, listened to brief speeches and chanted. They concluded the rally by meeting in two groups of 10 people with Gina Gormley, McCain's office coordinator.

McCain voted against the tax cuts of former President George W. Bush in 2001 and 2003.

"I cannot in good conscience support a tax cut in which so many of the benefits go to the most fortunate among us at the expense of middle-class Americans who need tax relief," McCain reportedly said in June 2001.

However, he has changed his positions on tax cuts and other issues since he ran for his fifth Senate term this year.

Meanwhile, the U.S. House of Representatives passed a bill Thursday to extend middle-class tax cuts while letting those for the wealthy expire, even as talks continued on extending them all, The Associated Press reported.

The Republican leadership wants to extend the tax cuts to the wealthiest 2 percent of Americans: singles earning more than $200,000 a year and couples making more than $250,000.

The Democratic leadership and their allies with MoveOn.org disagree with the Republican position that the tax cuts for the wealthy will stimulate the economy.

"I think it is really important that we stand and support the health of our country," said Sally Sanders, a painter and calligrapher who showed up with her father, Dick. "No country can survive if it favors its wealthy and powerful."

"I have a lot of friends who are out of work right now due to no fault of their own, and so I feel that not enough is being done to help the unemployed," Denis said. "Senator McCain and the other representatives should remember a majority of their constituents are not millionaires."

Denis, who recently moved to Prescott from Long Island, N.Y., described MoveOn.org as a "grassroots group. We are not affiliated with any political organization."

Rally organizer Bill Swahlen and John Fitz-Gerald read a list of 10 reasons to "stop the bailout."

• "Because the rich did just fine during the (Bill) Clinton years, when the tax rates were higher for them."

• "Because the wealthiest 2 percent have not been using their tax savings to create jobs, nor will they if their tax breaks are extended."

Swahlen then led two separate groups to meet with Gormley.

Gormley said she will mail literature from the rally participants to McCain's office in Washington, D.C.