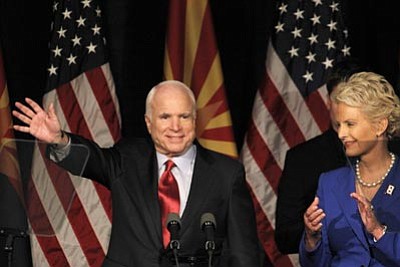 PHOENIX (AP) - Sen. John McCain routed conservative challenger J.D. Hayworth on Tuesday in the Republican primary in what could be the final campaign for the former GOP presidential nominee.

McCain spent more than $20 million to beat back an aggressive challenge from Hayworth, who relentlessly attacked the senator for his shifting stance on immigration and sought to tap into the anti-incumbent rage that has taken down other lawmakers in 2010.

"I will do my best to prove worthy of the honor," McCain told supporters. "I have never and will never take your support for granted, or feel I am entitled to your trust without earning it."

Two years after his bitter loss in pursuit of the White House, the 73-year-old McCain now begins a final 10-week push and will be the heavy favorite against former Tucson City Councilman Rodney Glassman, who won the Democratic primary.

A victory by McCain in November would raise a number of questions about the future of a gridlocked Washington.

Will he work with Democrats again? Will he play a role in immigration legislation? Will he be Obama's chief nemesis?

"My guess is that he will move back a little bit to trying to be a consensus builder, someone who will try to bring Democrats and Republicans together," said Bruce Merrill, a former pollster and McCain staffer who was surprised by the senator's sudden move to the right. "I hope so."

Hayworth, a former congressman and talk-radio host, had hoped to win over conservatives frustrated with McCain's famous willingness to buck his party and work with Democrats on issues like campaign finance, immigration and climate change.

In response, McCain abandoned his maverick label and cast aside one of the most powerful brands in American politics as he fought to reassure conservatives they could trust him, namely by taking a harder stance on border issues amid the debate over Arizona's immigration law.

McCain also portrayed Hayworth as a big-spending creature of Washington and a late-night infomercial "huckster." In 2007, Hayworth appeared in an infomercial pitching free government money on behalf of a company accused of swindling customers out of thousands of dollars.

In his victory speech Tuesday, McCain vowed to fight hard against the Democratic nominee and pledged to oppose increased federal spending.

Conceding defeat at a Scottsdale hotel, Hayworth thanked supporters for working hard despite McCain's ad blitz, and challenged them to advance their values by running for office.

"We recognize that our campaign comes to an end, but a fight for constitutional principles and conservative values never ends," Hayworth said.

Glassman, 32, lacks McCain's broad name recognition and the huge bank account he has from his 2008 presidential campaign. But he's not concerned about taking on a senator with deep pockets, saying the fact that McCain had to spend $20 million just to win his party's nomination "highlights the fact that Arizonans want something new."

McCain has never lost an election in his home state and has rarely faced serious opposition since he succeeded Barry Goldwater in the Senate in 1986.