Inmate escapee, fianc&#233;e captured
Member of the public spotted 'Bonnie and Clyde' duo at a campground 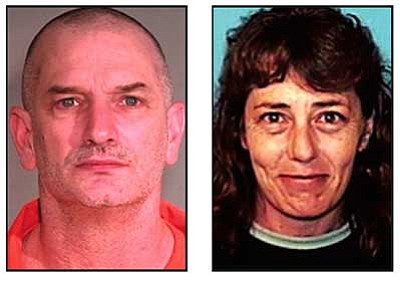 According to the Apache County Sheriff's Office, a member of the public called 911 after spotting a couple matching McCluskey and Welch's description at a campground on the edge of the Apache National Forest, 15 miles from the New Mexico state line.

The couple was arrested without incident and both face numerous charges.

Calls by The Daily Courier to the FBI, the state Department of Corrections and The Associated Press were unsuccessful Thursday night.

McCluskey and Welch - who McCluskey's cousin and fiancée, and is believed to have helped engineer his escape from jail - have been linked to the double homicide of a married couple in New Mexico.

McCluskey escaped the medium-security Arizona State Prison near Kingman on July 30 with Daniel Renwick and Tracy Province, allegedly with help from Welch and, later, two Arizona women - one of whom is McCluskey's ex-wife, a resident of Prescott Valley.

Renwick was captured and returned to custody on Aug. 1 after a car chase and shootout with police in Rifle, Colo., and Province was apprehended without incident Aug. 9 outside a church in Meeteetse, Wyo.

Authorities had been focusing their search efforts for McCluskey and Welch in the northern United States, near the Canadian border.

Earlier Thursday, the state's director of prisons said faulty alarms and negligent staff response allowed the three convicted murderers to break out, according to the AP.

Director of the Arizona Department of Corrections Chuck Ryan said an alarm system that had not been properly maintained in two years resulted in a "desensitization" of staff, which meant they failed to respond to alarms.

Two alarms were set off as the trio broke free, but neither alarm resulted in an officer response.

Ryan called the incident the "worst escape tragedy" since 1978.

The Prescott Valley woman who allegedly aided the escape of her ex-husband, his girlfriend and one of the other fugitives, is Diana Joy Glattfelder. DPS officials said she drove them from Flagstaff to Payson and then to Mesa.

Glattfelder, 43, was arrested Aug. 10 as she entered Yavapai County Superior Court in Prescott. She was booked into the county jail at Camp Verde and posted $10,000 bond and was released that afternoon, according to the Yavapai County Sheriff's Office.

They face charges of hindering prosecution and conspiracy to commit escape.

McCluskey and Welch became two of the most wanted fugitives in America. With long-haul truck driving experience, the pair were used to driving long distances over short time periods, Fidencio Rivera, chief deputy U.S. Marshal for Arizona, had said previously.

Their route has crossed more than 2,000 miles since their July 30 escape from a medium security prison in Arizona to the last concrete sighting in Billings, Mont., this past Friday.

"In two-and-a-half days they could have traversed the entire United States. They can be anywhere," Rivera said last week.

Little is known about the background of the couple whom authorities say fashion themselves a modern Bonnie and Clyde. McCluskey was serving 15 years in prison for attempted murder, aggravated assault and discharge of a firearm. He also served 14 years in Pennsylvania state prisons for a string of convenience store robberies in April 1992. Welch is from Arkansas, where she still has family.

FoxNews.com, The Arizona Republic, The Associated Press and previously published information from The Daily Courier contributed to this report.