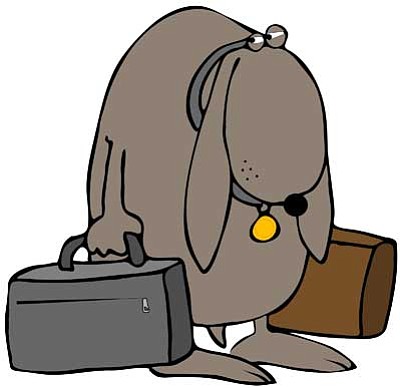 A news release this week from AAA tells us that unrestrained pets in cars can be deadly. AAA and Kurgo, a company that develops pet travel products, surveyed pet owners about their behavior when driving with their pets. Two-thirds admitted their pets distracted them.

"Distracted driving is a problem for everyone on the road, and passengers are often a contributing dynamic," said Linda Gorman, communications and public affairs director for AAA Arizona. "Many people do not think of their pets as passengers, but they must be treated as such because they can create just as much, if not more, distraction as a friend in the passenger seat or a child in the back seat."

According to the study, the AAA release said, 31 percent of respondents admitted to being distracted by their dog while driving. However, 59 percent admitted to participating in at least one of the following doggie distractions behind the wheel:

21 percent allowed their dog to sit in their lap.

Five percent played with their dog.

The survey also revealed that only 17 percent of those drivers who brought their dogs on car rides use some form of pet restraint in their vehicles.

"An unrestrained 10-pound dog will exert about 500 pounds of force in a collision at 50 mph, and in a collision at only 30 mph, an 80-pound dog will exert roughly 2,400 pounds of force," said Gorman. "Dogs, just like any other passenger, must be properly restrained not only for the safety of the animal, but also to protect the driver and other passengers."

Distraction is bad enough, but that last bit of information is chilling. If your pet is not restrained, and you hit the brakes or worse, crash, you are going to try to protect that pet. That takes your attention off your driving when it's most needed, and puts it on the animal. By then, it's going to be too late.

I'm convinced that the best way to travel with animals is to contain them in kennel crates. I personally prefer airline crates, because they are made for travel. They are solid and sturdy, and if you stop fast, hit something, or worse, roll your vehicle, at least the dogs are contained and likely to emerge without injury. But many people use wire crates successfully, and some have side, as well as front, doors if you need to quickly release your pets in an emergency.

Here is another thought about containing your dog while traveling. If emergency personnel have to get into your car, they won't have to fight your protective, scared or injured dog to do so. If the windows or doors come open or break during an accident, your pet won't be running loose in an unfamiliar area, scared or hurt and likely to be hit by another vehicle. We hear reports every year about family dogs that are lost after an accident.

With more of us taking our pets with us as we travel near home and on vacation, we need to think about their safety and that of the humans riding in the car, too. If you can't fit a crate into your car, you can find any number of sturdy pet restraints that buckle into the seatbelt. Just like us, if pets are restrained, they will be safer in a mishap.

As much as you like to have your pet close to you, remember that air bags are as deadly to dogs as they are to small children, and put your dog in the back seat.

It's a good time here to grouse at people who still put their family dog in the back of the pickup, and too many times, with no restraint at all. If your dog is tied in the back of the truck, at least it is not going to jump or fall out, although it still may be severely injured in an accident. But an unrestrained dog in the back of a pickup on the highway is a recipe for disaster. I once saw a lovely Golden Retriever, complete with red collar and leash, dead on the highway in Mayer. I wondered if it jumped out of someone's truck.

Take some time today to think about how you travel with your pet. You'll both be safer for it.