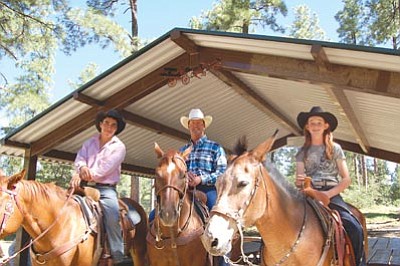 Doug Cook/The Daily Courier<br>From left, Bryce Hubbard, Brent Hubbard and Brittany Hubbard gather for a ride last week at the Groom Creek Horse Camp, where the Cathy Hubbard Memorial Pavilion, shown here, was built in July. Cathy, who died this past year, was Brent’s mother and Bryce and Brittany’s grandmother.

GROOM CREEK - In the early 1980s, Cathy Hubbard at last realized her dream of opening a horse camp in the ponderosa pines near Groom Creek, some 6-1/2 miles south of Prescott off Senator Highway.

Although it was a painstaking process to locate a suitable spot, acquire the land and clear adequate space for the complex, which now sits on the Prescott National Forest, Hubbard, a well-known horsewoman of Yavapai County, never surrendered.

Today, more than two decades later, the approximately 20-acre Groom Creek Horse Campground lures hundreds of riders out of the heat and into the cool, peaceful climes of the forest and its nearby equestrian trails.

Hubbard died a year ago, but her spirit lives on thanks to a new 28-by-24-square-foot steel pavilion that the Back Country Horsemen of Central Arizona (BCHCAZ), a Prescott-based nonprofit riding group, built and named in her honor at the camp's Loop C Group Campsite. This structure will shelter the site's dining and cooking area and accommodate as many as 48 people.

Kelly Schwartz, president of the local chapter of the BCHCAZ, said that since there are not many horse camps in Arizona, it's important for the Groom Creek complex to feature welcoming amenities for the riding public. Many riders who use the camp prefer camping in groups and would no doubt congregate at the pavilion, she added.

"There are a lot of riding clubs, and people like to ride together," she said. "It's a safety issue and a social issue."

During the pavilion ceremony, it was revealed that the idea for a horse camp/pavilion in Groom Creek started 36 years ago with a group of women who rode together here.

Schwartz said Hubbard was instrumental in getting the camp started, along with some friends, in the '80s. Sheree Pitrat, member of the BCHCAZ and longtime friend of Hubbard's, concurred. Hubbard coordinated and secured help from those who eventually built the horse camp, complete with its corrals.

"She liked to be in the saddle all the time," Pitrat said of Hubbard. "Her heart was in Groom Creek."

The late Isabelle Brown, co-founder of Friendly Pines Youth Camp with her husband, Bud, initially suggested that the U.S. Forest Service use some of its land south of the current campsite to start a horse camp. But the space was too small and the U.S. Forest Service ultimately donated 10 acres where the current camp is situated. The Prescott National Forest currently cares for the property with the assistance of the Back Country Horsemen.

Alan Quan of the Prescott National Forest credited the BCHCAZ for its work to constantly improve the camp through the years.

"The Back Country Horsemen have put a lot of sweat, tears and money into this," he said.

In July the BCHCAZ erected the memorial pavilion - which Classic Recreation Systems of Dewey fabricated - thanks to donations from the Horse Lovers Foundation of Arizona, along with several riding organizations, businesses and individuals.

BCHCAZ members Spike Hicks, Denny Murray and Clyde Detweiler, among 11 others, spent more than 200 volunteer hours over the span of nearly two months on the pavilion. Project volunteers and workers traveled more than 200 miles hauling in equipment and materials, Murray said.

Also during the pavilion dedication, Brenda Hubbard, Cathy's daughter, and her son, Brent Hubbard, along with his children, Bryce and Brittany Hubbard, presented a Western metal art piece that now hangs on the front of the structure. Brent made the piece, which depicts a rider strolling off in a horse-drawn carriage in memory of his mother.

Fittingly, the ceremony concluded with a toast to Cathy and the pavilion that horse riders will use for years to come.

"On behalf of my mom, this pavilion honors all the hard work that she put in so everybody could come up here and enjoy the camp," Brent Hubbard said. "The facility's great."

For more information about the Groom Creek Horse Campground, call the Bradshaw Ranger District at 443-8000 or log on to the Internet at www.fs.fed.us/r3/prescott/recreation/camping-day-use-ohv/groom-creek-horse-cg-and-day-use.shtml.