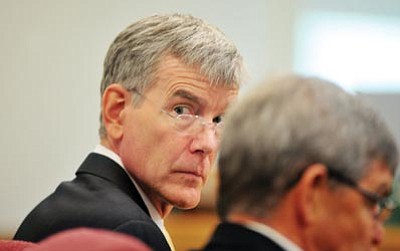 Les Stukenberg/The Daily Courier<br>Testimony in the Steven DeMocker trial Friday revealed that during the autopsy the victim's nails were clipped with a large clipper “from a drawer” in the morgue, which was not sterile.

PRESCOTT - During chilling testimony Friday in the Steven DeMocker murder trial, the veteran former Yavapai County medical examiner who performed the autopsy on victim Carol Kennedy said she suffered at least seven major skull fractures the day of her violent death two years ago, most likely from a golf club.

Prosecutors allege that Kennedy's former husband, Steven DeMocker, 56, a Prescott stockbroker, committed first-degree murder on July 2, 2008, by bludgeoning Kennedy to death with a golf club in her Williamson Valley home. DeMocker remains in custody in lieu of a $1 million bond.

Expert witness Dr. Philip Keene, who served as the county's medical examiner for nearly 29 years and has conducted an estimated 12,000 autopsies since 1969, said he autopsied Kennedy's body the afternoon following her death.

Keene said he found that most of Kennedy's injuries came to her head and face. He added that of the skull fractures, at least four of them were to the top of her skull from a downward striking force. "The blows on the back of the head came from behind and were coming from the top, down," he said.

When he began the autopsy, Keene, who received Kennedy's body fully clothed, said he found trace evidence of gray hair on her clothing.

"To the naked eye, it looked like animal hair," he said.

During the exam, Keene said he clipped all of Kennedy's fingernails with a large clipper "from a drawer" in the morgue, which was not sterile. When Deputy County Attorney Joseph C. Butner III asked why the clippers were not sterilized, Keene didn't seem to have a clear answer, other than to say that the medical examiner's office now uses prepackaged nail clippers during autopsies.

"I don't know when the clippers (for trimming Kennedy's nails) were last used," Keene said. "They were kept in an unlocked drawer. I don't know if others (in the morgue) used the clippers."

Keene later testified that Kennedy sustained multiple blunt force injuries, which he thinks came from a golf club. Kennedy had contusions on her right forearm near her wrist and elbow, and her right shoulder, injuries that would indicate a defensive struggle with her assailant, he added, in attempts to protect herself.

Kennedy had "rod-type" injuries from a club on her right forearm and upper arm with an expanded blue area of bruising that indicates a force of impact from an instrument, Keene said.

In some autopsy photos of Kennedy's body, which Keene took a week after his initial exam, he placed a driver golf club next to bruises on the victim's arm. He said the shape of the club was a "good match" when compared to the shapes of the bruises.

"The bruises mimic portions of the head of a golf club," he said.

Keene went on to testify that he noticed ant bites on the inside of Kennedy's leg, which came after her death. Scuff areas on her left thigh and two 1-inch abrasions over her right shoulder blade appeared to be caused by her body scraping across a surface, although Keene said he did not know what surface it might have been.

The DeMocker trial will take a weeklong break and resume at 9 a.m. Aug. 24 at the Yavapai County Courthouse in downtown Prescott.