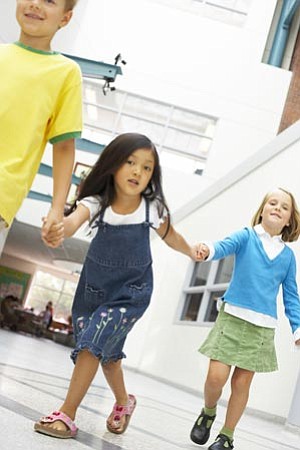 At the top of the list is "safety in numbers." Parents should encourage their children to walk or ride to school with a group of other children. In the case of younger students, parents may want to consider taking turns walking their children to school. As a "walking school bus," parents can pick up children along the route to school.

Before school starts, Katan encourages parents to show their children the safest route to walk or bike to school. At the same time, parents can show children any hazards they should avoid.

According to Katan, bike riders "should always walk their bikes in crosswalks. It is illegal to ride a bike on the sidewalk in Prescott, but parents teach their children to ride there. I would not tell them not to, but even when riding on the sidewalk, they should ride with traffic, not against it."

Katan also urges parents to teach their children to "bike safely by always wearing a helmet and making sure their bikes are in good repair."

Motorists should slow down and watch for children, and stay off cell phones while driving.

AAA Arizona communications and public affairs director Linda Gorman said, "In Arizona, there were more than 3,500 crashes in 2008 involving pedestrians and bicyclists. As the school year begins, we urge motorists to exercise caution when driving through neighborhoods, parks and school zones."

• Walk around your vehicle before moving it, especially during morning and afternoon hours.

• Scan between parked cars and other objects for signs that children could dart into the road.

• Eliminate distractions. Taking your eyes off the road for two seconds doubles the chance of being in an accident.

• Plan ahead. Leave early and build in extra time for congestion. Modify your route to avoid school zones and traffic.

• Drop children off on school property, not on neighborhood streets.

• Obey traffic laws. Drive no faster than 15 miles per hour in or near a school zone. Fines double when "Stop When Children in Crosswalk" signs are present. In addition, remember that school zones are non-passing zones. Always stop for school buses that are loading or unloading students. It is illegal to pass a school bus with flashing red lights.

AAA Arizona encourages parents to review the following safety precautions with children who will be walking or bicycling to school:

• Walk only on the sidewalk and cross the street only at crosswalks.

• Avoid walking in front of, behind or between parked cars. Let children know that even though they can see the vehicle, the driver might not be able to see them.

• Stop at driveways to make sure no vehicles are coming in or out. A person backing out of a driveway may not see a pedestrian in the rear-view mirror.

Three years ago, Safe Routes to School started with two schools: Prescott Mile High Middle School and Taylor Hicks. The program has grown to include eight schools - public and charter.

Safe Routes to School has received $700,000 from the federal government through the Arizona Department of Transportation. ADOT awards the money to the City of Prescott for infrastructure improvements around schools. The city designs and builds improvements that include sidewalks, signage, improved crosswalks and bike lanes.

Talk of the Town: Biking to school solves two big problems
Editorial: School's back in; drive extra-safely
Prescott students come together for old-fashioned walk to school
What does it take to walk to school safely?
Letter: Program aims to educate kids on health