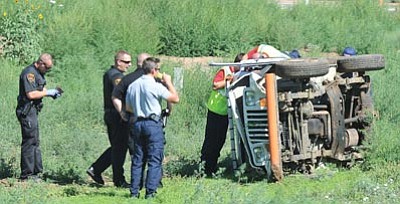 Police responded at 9:12 a.m. to Highway 69 and the Villages of Lynx Creek, and observed a 1994 Jeep Wrangler overturned in the field near the Villages. They pronounced Edwin Bush, the sole occupant of the Jeep, dead at the scene.

Bush was driving north on Highway 69. Witnesses reported his vehicle veered toward the shoulder as if to pull off the road. The Jeep continued and left the road, rolling several times. The manner and cause of his death remain to be determined pending a medical exam, according to Prescott Valley Police spokesman Sgt. Brandon Bonney. The crash, which did not delay traffic, is under investigation.