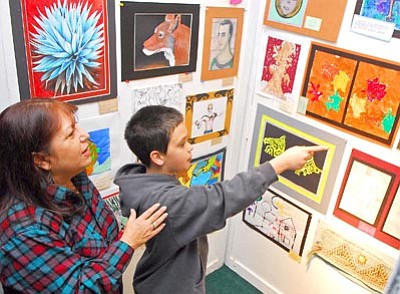 The Daily Courier/file<br> Local school districts’ budgets are tight and getting tighter. Administrators have crunched the numbers and, if Prop. 100 fails next month, educational art programs will be among the cuts.

Local school districts are making drastic cuts to their 2010-11 school year budgets. A decrease in money from the state, the elimination of state-paid all-day kindergarten and increases in state retirement contributions and health insurance premiums have school officials tightening their belts for the second year in a row.

How tightly school districts pull that belt will depend on whether Arizona voters approve Proposition 100 on May 18.

Prop. 100 asks voters to approve a temporary three-year one-cent sales tax, with two-thirds of the revenue for primary and secondary education and one-third for health and human services and public safety.

Using those amounts, education would receive about $605 million the first year; $638 million the second year; and $699 million the third year.

School officials already identified staff and program cuts they must make no matter the result of the May 18 election.

If voters do not approve the initiative, school officials already have identified deeper cuts they will have to make to staff and programs.

The district notified 39 teachers and 19 classified employees that the district could eliminate their jobs if voters do not approve Prop. 100. These positions include the music, art and drama teachers at Prescott High School, as well as physical education, world geography and library positions.

"This is a very challenging time to be an educator in Arizona but we have no choice but to 'prepare for the worst and hope for the best'," Superintendent Kevin Kapp said in an e-mail to district employees.

Kapp gave the PUSD Governing Board two budget deficit projections based on the Prop. 100 vote.

If voters approve the one-cent sales tax, the PUSD budget deficits include:

No matter what happens, PUSD must reduce its budget by $3.66 million.

Scenario A - If voters approve the one-cent sales tax:

Scenario B - If the one-cent sales tax fails:

"It is important to note that the HUSD Governing Board and administration have been diligently and systematically examining every district function and expense, seeking greater efficiencies in energy, material consumption, and staffing as needed and appropriate," Schmitt said. "The goal of this process has been to resolve our increasing, state-imposed budget shortfalls, while aggressively: 1) protecting the academic integrity of our classrooms; 2) maintaining high-quality instruction; and 3) strategically preserving the jobs of our valuable staff."

Chino Valley School officials have yet to make public their plans for the district budget deficit.

The CVUSD Governing Board and administration have scheduled a pubic meeting April 26 to discuss the district's financial options.

However, in a March 30 letter to the Chino Valley community, Superintendent Duane Noggle reviewed the district's budget crisis.

CVUSD receives 60 percent of its revenue from state aid and 40 percent from property taxes. When the state cuts back, the district must cut back.

"As part of the effort to reduce the deficit, the state cut full-day kindergarten or, as the Legislature called it, 'Restoration of Half Day Kindergarten.' Soft capital (used to buy textbooks and classroom equipment) and Building Renewal (for maintenance of buildings) were also cut in the approved state budget," Noggle wrote. "More cuts to education will come if the temporary sales tax is not approved which will include a reduction of $781 per student in the base support level and the elimination of the unrestricted capital fund."

According to Noggle, during the past three years the district laid off 60 employees and cut spending by $1,419,536.

"This does not include cuts in state grants and other nonformula funding that are outside the maintenance and operations budget. All told, over the last two years the district has cut over $2 million for the overall budget; and even today, the district has stayed within budget as required by state law and has been able to maintain basic classroom services," Noggle said.

CVUSD has not added any administrative positions within the past two years and combined two-and-a-half M&O administration positions into one. The district pays the salary for the coordinator of student services with grant money, not M&O money.

"The district also reduced utility costs by 30 percent by going to the four day school week," Noggle wrote. "More cuts in these areas are few and far between, as most of the cuts last year amounting to $1.4 million were made in administrative support services and utility costs. More cuts will be made in administrative support services, but there just are not a significant amount of cuts left to preclude a reduction in classroom services and an increase in class size."