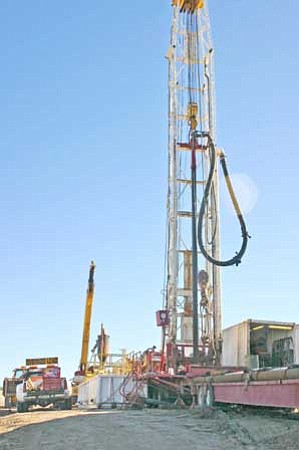 The town is having this well drilled because town's sole water source - the Country West Well - is producing sand. The well is located on the east side of Highway 89 and south of Road 2 North.

Ron Grittman, Town engineer and Public Works director, on March 11 reminded the council the Country West Well was only pumping 300 gallons per minute to 350 gpm. He said the well had been pumping 650 gallons per minute since 2005. However, in December 2009, it dropped to 500 gpm. In late February it fell to 430 gpm.

Robin Allen, a town engineer said Thursday the well is now pumping 400 gpm. On top of that good news, she said the demand for water is now 74,000 gallons per day. "At this rate the town has enough water in storage to supply the needs of the customers on the town's water system," she said.

She said as of Thursday afternoon Drill Tech's crews have reached the 450-foot mark.

Mayor Jim Bunker said, "If the drillers continue at this rate we should be fine."

Allen said Drill Tech crews didn't stop at the 200-foot mark because the well's capacity was 350 gpm. "They are drilling down to the 750-foot level because they are targeting a zone of the aquifer to get the best rate of production," she said. "The goal is a well that produces 1,250 gpm."

Bunker said a well with that production "will give us lots of extra capacity."

Once the well reaches the 750-foot mark the water the town will test it for arsenic. So far, Allen said, the level of arsenic in the water is good. Town staff is waiting to see if that level will remain.

Allen said, "Right now the drillers are making a foot per hour. If all goes well the well will be drilled in two weeks and the casing and equipment will be in place in four to six weeks."

If the well is online in six weeks the town won't have to instill water conservation measures.

Grittman previously said June and July are the town's two heaviest demand months. The demand is between 700 gpm and 750 gpm, he said, so, it is imperative the town has the well online before June.