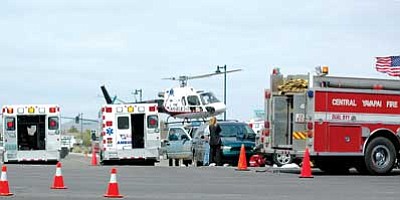 Cheryl Hartz/Special to the Courier<br />Prescott Valley police, three fire engine companies, four ambulances and one helicopter responded to a four-vehicle crash at the intersection of Highway 69 and Navajo Drive Saturday afternoon. Six people were injured; two people were taken to the hospital with life-threatening injuries.

Central Yavapai Fire District Battalion Chief David McConnell said a total of six people were injured in the crash, which happened around 1:30 p.m., but he did not have any more information at press time.

Paramedics took a pair of the accident victims to Yavapai Regional Medical Center East while one of those with serious injuries went by helicopter to John C. Lincoln North Mountain Hospital in Phoenix.

Two cars sustained heavy damage while a pair of others had minor to moderate damage.

McConnell said officers did not shut down traffic on Highway 69 since the accident mainly transpired on the Navajo Drive side of the intersection.