Restaurateur brings her comfort food back to Prescott 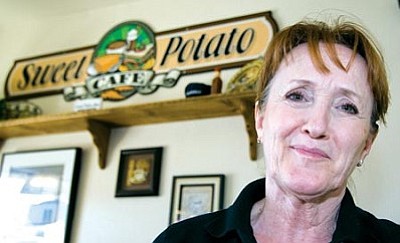 A veteran of the restaurant scene is back in business.

She serves breakfast and lunch dishes daily at the same spot she formerly ran as Trisha's Slow Food Café for about five years.

"It's just something you do, and you don't think twice," she said.

Bauer's return was fairly quick for her and her husband, Russell, who began serving tasty meals many moons ago in Minneapolis, opening Patsy's 2400 Café in the mid-1980s.

Bauer remembers Russell pacing the floor when they originally opened their doors and how business took off about an hour later.

"Ever since then, we've always made it work," she said.

From there, Trish and Russell came to Phoenix and went on to run Patsy's Café at 38th Avenue and Indian School Road and Trisha's Li'l Café at Bell Road and 15th Avenue in the early 1990s.

Bauer said she eventually sold her Phoenix-area restaurants and came to Prescott in the late 1990s with plans to enjoy a slower lifestyle and open a restaurant here.

"I knew we were going to find a restaurant up here," she said.

"You know what's funny, I make the same food today as I did back then. I just add to the menu," she said. "I'm glad to be back."