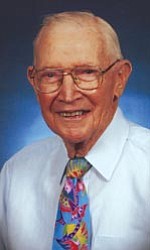 John Ervin Heckman was born 22 September 1909 at the home of his parents, Mary and W.S. Heckman, a farm located between the small towns of Leona and Robinson, Kansas. He died 16 January 2010 at his home in Prescott after a long illness.

John grew up on the farm and graduated from Robinson High School. He later attended the State Teachers College in Emporia, Kansas. John met his wife, Loucile Mayhew, while she was a teacher in Robinson. In 1939, the two were married in Atchison, Kansas, after which they moved to Los Angeles, California, where their daughter was born. A few years later, the family moved to Long Beach, California, where John was employed with Golden State Dairies. While in Long Beach, John was very active with the North Long Beach Community Presbyterian Church, including service as a church deacon, co-skipper of the Mariners group and soloist with the church choir.

In the late 1960s, John and Loucile moved to Santa Barbara, Calif., where John operated a dairy sales business. He was an active member of the Montecito Presbyterian Church. Following their retirements, the couple moved to Prescott in 1976. Here, John was an active member of Trinity Presbyterian Church, including co-chairing the potluck group and singing with the church choir.

John and Loucile traveled throughout the United States and to Canada and Great Britain, as John supported his wife with her extensive genealogical research projects. They also visited Alaska, Europe, Scandinavia and New Zealand. John enjoyed spending Christmas holidays with his family in Kauai, Hawaii.

In 1999, John's 90th birthday was celebrated by nearly all his extended family at a large dinner in Independence, Missouri. John enjoyed music and singing (he was a soloist at many weddings), watching all "ball" sports and growing flowers, especially roses.

John was predeceased by his wife in 2005. He is survived by his daughter, Linda Heckman Sonnenberg of Prescott; his son-in-law, Gary Sonnenberg of Juneau, Alaska; his niece and her husband, Geraldine and Pat Pargen of Raytown, Missouri; his American Field Service daughter and her husband, Irmeli and Jorma Routti of Helsinki, Finland; many great-nieces and great-nephews; and his therapy dog, Gabriel, who gave John many hours of quiet joy and companionship. Special gratitude goes to Prescott neurologist John MacKenzie, who gently cared for John during his last years, and to Maureen, Rebecca, Jessica, Jacob, Rosemary and Pat.

John's remains will be buried alongside Loucile's in Effingham, Kansas. Memorial donations may be made to The Alzheimer's Association, 17th Floor, 225 N. Michigan Ave., Chicago, IL 60611-7633, and/or the Yavapai Humane Society, 1625 Sundog Ranch Road, Prescott AZ 86301.