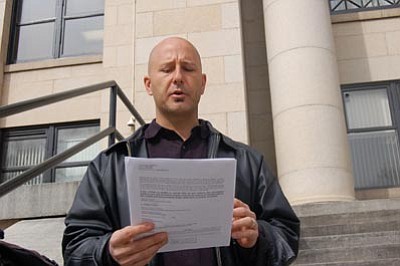 Monday's trustee's sale was typical, according to Holevar, an auctioneer who has been conducting the sales at 10 and 11 a.m. weekdays at the steps of the Yavapai County Courthouse for three years. He is an independent contractor who works on behalf of a number of service companies and attorneys.

"This is the norm," Holevar said.

Holevar, who grew up in Prescott, said prospective bidders buy fewer than 1 percent of the properties for sale at the auctions.

"This is typically not the best place to find a great deal," he said, adding opening bids generally are "too high."

Moreover, bidders must bring cashier's checks for $10,000, and pay the remainder of the amount by 5 p.m. on the next business day, Holevar said.

"We show up (at the trustee's sales) whenever there is one that is worth our time and investors' money," Biggs said. "Sometimes they are deals. We might go to one (sale) a month."

Trustee's sales take place after property owners - known as "trustors" - fall too far behind in mortgage payments. Holevar and others blames foreclosures on homebuyers who overextended themselves, banks making faulty loans and a downturn in the economy.

Banks and other lending institutions, known as "beneficiaries," gain ownership if they cannot sell the properties at trustee's sales, and hire real estate agents to unload the properties.

But on Monday, Holevar announced that sales for the six properties had been postponed, some at the request of the lenders and others for no stated reasons.

Another factor that leads to postponements occurs when lenders try to work with property owners who have fallen behind in their payments.

The lender requested postponing a trustee's sale for a home on Starlight Drive in unincorporated Prescott Valley. Attempts to reach the owner of the home were unsuccessful.

Unlike a house on South Virginia Street in Prescott slated for a trustee's sale April 14, the Starlight Drive residence is occupied and does not have notices on the mailbox and window. "This address is currently vacant," a notice in all capital words states on the mailbox at the yellow house on South Virginia Street. "Do not place mail in this box."

A notice on the window from the mortgage company identifies the parcel number and the former owners, and lists the principal balance at $160,000. Efforts to reach the former owners were unsuccessful.

No notice appears on the front of a home on North Date Creek Drive in unincorporated Prescott Valley that is slated for a trustee's sale Wednesday.

"It's canceled," a woman answering the door said, referring to the trustee's sale. She declined to provide any more details about the status of ownership for the residence.

The notices provide the dates and times of the trustee's sales, the addresses of the affected properties, the principal balance and the names of the lenders.

By contrast, Holevar said the legal descriptions he provides during trustee's sales say little. They do not indicate whether the property contains a house.

Some of the properties lack street addresses, Holevar said.

The Recorder's Office's website posts lists of properties that face potential foreclosure. The website posted 50,000 listings in 2009, the same as in 2008. Property owners have 90 days to refinance or make other payment arrangements in order to forestall trustee's sales.

For information, log onto http://eweb.co.yavapai.az.us/recorder/eagleweb/docSearchPOST.jsp, type in dates in the "Recording Date" field and hit the search button.