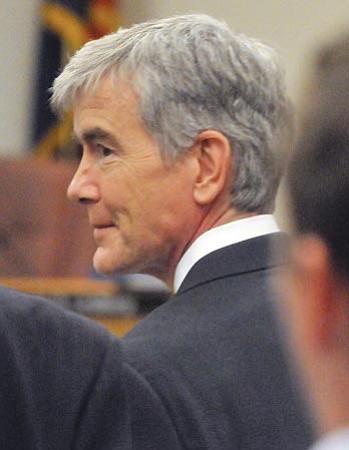 PRESCOTT - Steven Caroll DeMocker, indicted nearly one year ago on charges of murdering his ex-wife, Carol Kennedy, returned to court Tuesday asking Superior Court Judge Thomas B. Lindberg to reduce his bail or release him with an electronic ankle bracelet monitor.

His defense team filed a motion to dismiss the death penalty notice for lack of evidence.

Judge Lindberg denied the motion to dismiss the death penalty notice and rescheduled the hearing to Oct. 20. He told DeMocker that he would "take the (monitoring device) matter under advisement" and notify the prosecutor and defense lawyers when he makes a decision.

DeMocker, dressed in a dark blue suit, smiled and nodded at nearly a dozen family members sitting in the courtroom before he sat at the defense table. Three lawyers and a private investigator flanked him.

"There's foot-dragging going on, but it's on the other side of the aisle," Butner said.

Prosecutors believe that DeMocker, 55, hid in trees behind Kennedy's house July 2, 2008, and bludgeoned her to death with a golf club.

DeMocker has consistently said he is innocent. However, deputies arrested him Oct. 23, 2008, and a Yavapai County grand jury indicted him Oct. 31 on first-degree murder charges and burglary. Since his arrest, he has been detained in the Camp Verde Detention Center on a $2.5 million bond.

Because of aggravating circumstances, County Attorney Sheila Polk decided to pursue a death penalty case. Lindberg set a tentative trial date for May 4, 2010.

"He never intended to run away," Sears said.

The second part would have a court official attaching a GPS ankle bracelet to DeMocker that would allow "real-time" surveillance. The new tracking system would allow police to set up an "electronic fence" that can send an alert signal to cell phones, fax machines or text messages.

The third part would include active monitoring by pretrial court services.

"You cannot trust him," Butner said. "To use a cell phone to keep him in an inclusion zone doesn't make sense."

Sears called the books "trash" and "a joke."

Butner said the books "show how someone can disappear."

DeMocker's parents, John and Jan DeMocker, sent a letter to Lindberg before the hearing.

"The Kennedy and DeMocker families have suffered staggering losses from this tragedy," the letter reads in part. "Meanwhile, Carol's killer is still walking free."