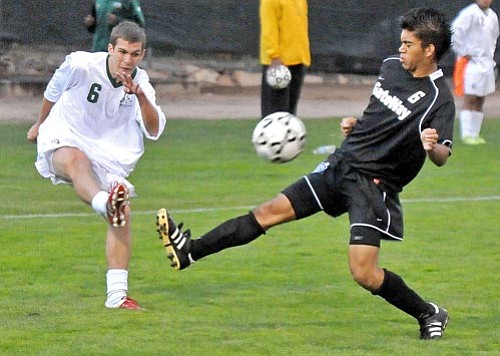 Ryan Fuertsch, left, seen here in action versus Gateway CC on Wednesday, and the rest of the Yavapai College soccer team dropped to No. 12 in the latest NCJAA Division-I poll Matt Hinshaw/The Daily Courier

For a team which has been ranked No. 1 in the nation 76 times in the last 20 years, seeing the Yavapai College soccer team come in at No. 12 this week in the latest NJCAA Division-1 poll may a bit strange for Roughrider fans.

YC, coming off back-to-back NJCAA titles, started the season atop the preseason poll. But a pair of losses in its first six games dropped it to 12th in the first rankings of the regular season this week.

It's just the second time since 1989 the team has been ranked out of the top-10. They went from 12th in 2002 to the first of consecutive national championships.

The fact that YC has lost twice hasn't hurt its standing as much as it has bolstered that of the Arizona Community College Athletic Conference. The 'Riders are among four Arizona schools in the top-15 in the nation.

Chandler-Gilbert, who beat YC to open the season, sits at No. 5. Phoenix, the other team to beat the 'Riders, is No. 9. Pima's two losses early in the season did not drop it from its preseason spot at 14. Arizona Western, the ACCAC points leader, is just on the outside among teams receiving votes.

YC will have an opportunity to improve its national standing and, more importantly, its standing within the conference with matches at Pima on Wednesday, and at home for Arizona Western on Sept. 26 and Chandler-Gilbert two days later

The Yavapai College volleyball team is receiving votes in the second straight NJCAA Division-1 poll. In fact, all three ACCAC D-I teams are receiving votes nationally with Arizona Western just outside of the top 20 and Eastern Arizona coming in at No. 13.

The Roughriders (9-6, 1-0) will take on the Matadors and Gila Monsters this weekend in Thatcher. They face Eastern Arizona on Friday night and Arizona Western on Saturday afternoon.